Photographs relating to this article, including those in this extract, may be found in Gallery 1.4.1
A major tragedy hit Prudhoe on 8th February 1910. It became known as the Bog’s Disaster. The scene of the accident was Bog Cottages, situated at the foot of Bell’s Wood adjacent to West Wylam Colliery. Recent wet weather and the sandy nature of the soil had caused the landslip. Bog Cottages were situated below a plantation which rose to a height of some 200 feet above the little whitewashed buildings. The accident appears to have occurred at about half-past nine in the morning, a time when most of the men folk were at work. At that moment, a huge tree became uprooted and slid down the bankside, driving its roots in front of it, carrying with it an avalanche of earth and clouds of dust. The whole mass crashed through the roofs of three houses, completely burying them in debris. The tree itself went through the roof of Mr & Mrs Lindsay’s home and the weight virtually demolished the other dwellings. No warning of the avalanche seems to have been seen or heard and all was over in a few seconds. With the exception of two gables, there was little to mark where the houses had stood.

The mass of earth which came down was estimated to have been between four and five hundred tons. Poignant examples of the landslip’s force were revealed when labourers from the Mickley Coal Company were set on to remove all the debris so that no trace of the tragedy remained. In one case an iron mangle had been driven through the two foot thick wall of one of the gables. Bedsteads had been tom to pieces and their iron frames twisted like wire and heavy pieces of furniture had been smashed to matchwood.

The back shift men who were due to go on to work helped local residents with the rescue work. The dead bodies of 55 year old Elizabeth Lindsay, 35 year old Elizabeth Chariton and 45 year old Sarah Harrison were dug out of the wreckage. (Another report from the ‘Hexham Courant’ gives their ages as 49, 35 and 29 years respectively!). During the rescue work a number of local doctors were summoned including Dr Bishop from Wylam, Dr Hunter from Mickley and doctors McCoull,

Lockhart, Levack, Gibson and James from Prudhoe, together with Nurse Colvin and Nurse Bishop. Sergeant Crawford of Newburn was accompanied by a number of policemen.

Among the lucky escapees was Annie Stobart, an eleven year old cripple, who was thrown underneath a table which protected her from the tons of rubble which came down. Fourteen year old Selina Lindsay was thrown against the window but the sofa stopped her from crashing through it and she was trapped by parts of a bedstead, planks and the remains of a table and chest of drawers.

Another survivor, Thomas Lindsay, aged 17, declared: “I was sitting on a cracket near the fire and my stepmother was sitting on the floor beside me. My sister was near the door. We were all talking when, all of a sudden, the house collapsed. We hadn’t the slightest warning of anything about to happen, and we were all thrown into confusion. Something struck me on the head and knocked me towards the wall. The falling rubbish caught me and pinned me by the legs”.

Thomas and Selina Lindsay, together with Annie Harrision (aged 11) and her sister Evelyn (aged 10) and Robert Duncan Corbett (aged 3) were rushed to hospital. It is a double tragedy to think that both the Lindsay children and the Harrison children had also to cope with the death of their respective mothers.

Rescuers found three year old Robert Corbett standing in the debris, crying from the shock and the pain of being flung into the kitchen fire. Five days after the disaster, the mewing of a cat was heard and it was dug out, suffering from only a broken leg.

The Bog’s Disaster attracted many sightseers as is evidenced by postcards of the disaster which were published at the time. The ‘Hexham Courant’ reported that between two and three hundred passengers had arrived at North Wylam Station from stations between Newcastle and Wylam on the Newburn Branch Line and hundreds journeyed by trap and on foot to view the ruined cottages. It is stated, however, that “their curiosity was turned to good account, as collection boxes placed at the scene to raise money for the survivors were well patronised”. 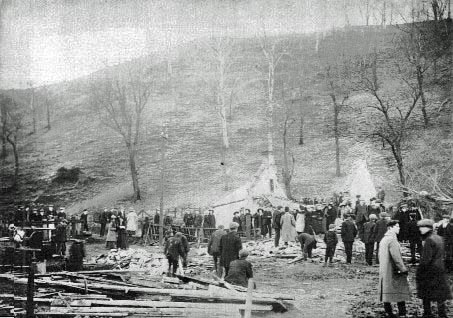 Crowds view the scene of the Bogs Bank Disaster 1910