Photographs relating to this article, including those in this extract, may be found in Gallery 4.2.3
The first flush of school building in Prudhoe was completed in 1886 and it was nearly a quarter of a century before the educational provision was extended when a new school was built on the West Road. This building became known locally as ‘The New Schools’ and is, in fact, still referred to as such by older residents. For a long time, this title was, in relative terms, very apt since no more schools were built in the town until the 1950’s.

Ralph Brady (previously headmaster of Low Prudhoe Council School) became Prudhoe West Council School’s first headmaster and his first entry in the school’s logbook is made on Monday 7th June 1909. In addition to Mr Brady, the staff consisted of Marg. Elizabeth Pyle (Infant mistress), Hannah Douglas Dixon (certificated assistant) and Matthew Henry Young and Hannah Herron (uncertified assistants). On the first morning 173 children presented themselves for admission and by the end of the first week there were200 on the roll. In the Infant School Miss Pyle was having to cope with 82 children. Mr Brady attempted to get some assistance for her from the County Education Committee whose response was the suggestion that he rearranged the classes. Mr Brady records “I have therefore taken from the Infant Room 25 children who will be seven years of age before the end of the year and placed them under Miss Herron. This leaves 57 children under the infant Mistress who is arranging them into two divisions”.

In spite of the fact that this was a new building, the provision of heating seems to have been far from adequate. The heating apparatus was tried for the first time at the end of October but with no great success. Mr Brady writes “The school got so cold this morning (October 25th)  on account of the fire being allowed to go out, that the children were dismissed at 11.30 until the afternoon meeting”. Again, in November, he records, “the temperature at 9 o’clock is as a rule below 50 degrees. ... The temperature is 43 degrees at 9 o’clock. The supply of coke has run out... the playgrounds are covered with one inch of slush”.

The school had its first inspection in July 1910. It is stated that “the school has made a very satisfactory beginning. The order is good and the children show considerable interest in their work. ... On the whole, the work is full of promise”. It was a good report. The school was on its way!

Throughout his years as headmaster, Ralph Brady dutifully recorded the life of the school. Each winter there were problems with the heating of the classrooms and the supply of coke. They even tried leaving the gaslights on all night to maintain some heat in the building to little effect! The results were low attendance due to illness of both children and staff.

The number of children on the roll steadily increased, but there was a regular turnover of staff resulting in frequent rearrangements of classes and changes in the timetable. Overcrowding resulted in the youngest Infants being taught in the corridor and when no supply teacher could be obtained, great use was made of Standard 7 boys and girls (12-13 year olds) to teach the younger children.

New subjects were introduced as follows: Hygiene (the care of teeth, nail and hair; ventilation, vaccination, food and clothing for Infant girls, smoking for boys). Domestic Economy for the girls only (washing day; baking day, qualities of a good housewife, daily household duties). Moral Institution (gentleness in girls, masculineness in boys, truthfulness, courage, love of this country). Treatment of Simple Accidents (cuts and bruises, burns and scalds, drowning and choking, fits and fainting, how to make poultices, medicines for the household).

A new Infant School building was opened on the site in May 1914 and this took some of the load from Mr Brady’s shoulders.

The First World War had its effect on the running of the school. In complaining about the loss of teachers’ services it was noted that Mr Harrison, a member of staff, had not been available for eighteen weeks because he had enlisted in the army. Later on it is recorded that “Mr Harrison, who enlisted at the beginning of the war has been posted as missing” and “Mr Pringle is absent. He is applying for a commission”. (Mr Pringle recommenced his duties at the school in October 1916, having been discharged from the army as medically unfit).

Elsewhere in the logbook it is noted that Alex Wright, who had been a student teacher at the school, had been killed in the war. The children gave a concert in the Electric Theatre “for the benefit of the local men fighting at the front”. Highlighting the effects of the war, “Piper Logan VC and Lance Corporal Gilhome DCM visited the school and after receiving a great reception from the children, spoke a few words to them”. The war also caused a shortage of school materials. In consequence the schools had a “no paper week”. Mr Brady did not escape the effects of the war himself, for it is recorded on 1 st October 1917 that he had been attending a course of military instruction at Chelsea Barracks in conjunction with his position as Platoon Commander at Prudhoe. 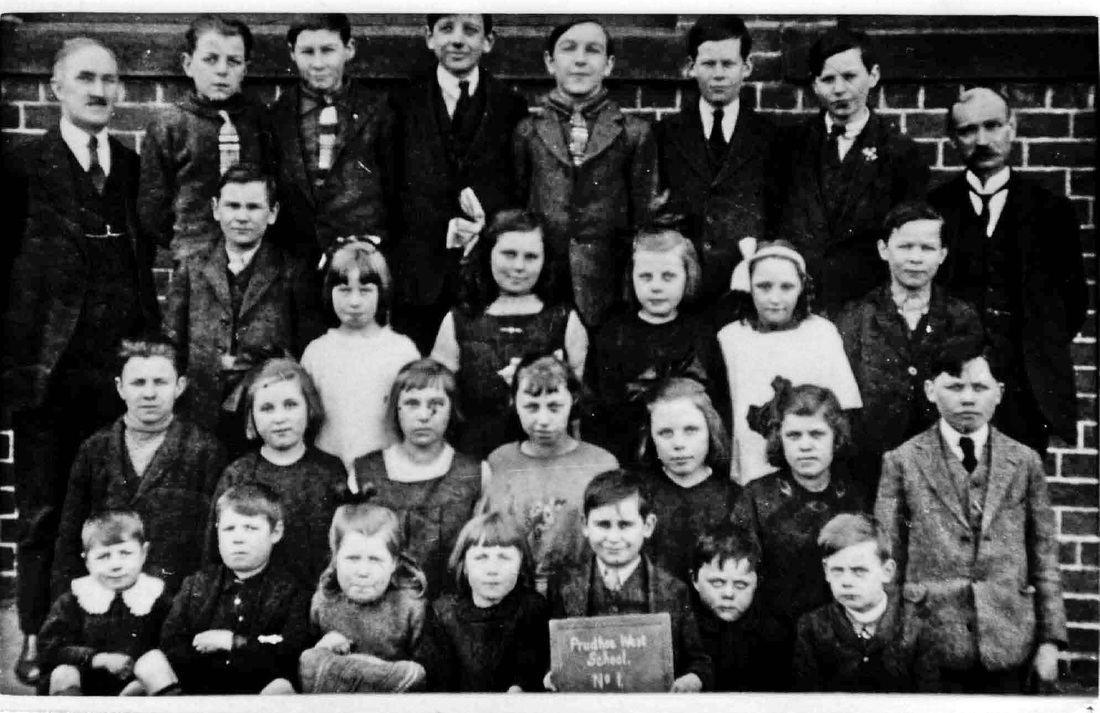 Prudhoe West School c. 1922
The 1921 coal strike took its toll on the schools of the area. At Prudhoe West there was no heating in school during “a very chilly spring”. Even worse, it was found that “only three children had had a satisfactory breakfast on account of the shortage at home.” The children were fed in school with bread and butter, and tea at playtime and, in succeeding weeks they were fed regularly with broth and bread and butter. There was no Race Week holiday that year as the children still had to be fed!

The 1926 General Strike brought with it a repeat of the above situation. Between 140 and 150 children received breakfast and dinner in school each day. Sixteen of the older girls were detailed to assist in preparing the food, feeding the children and cleaning up. 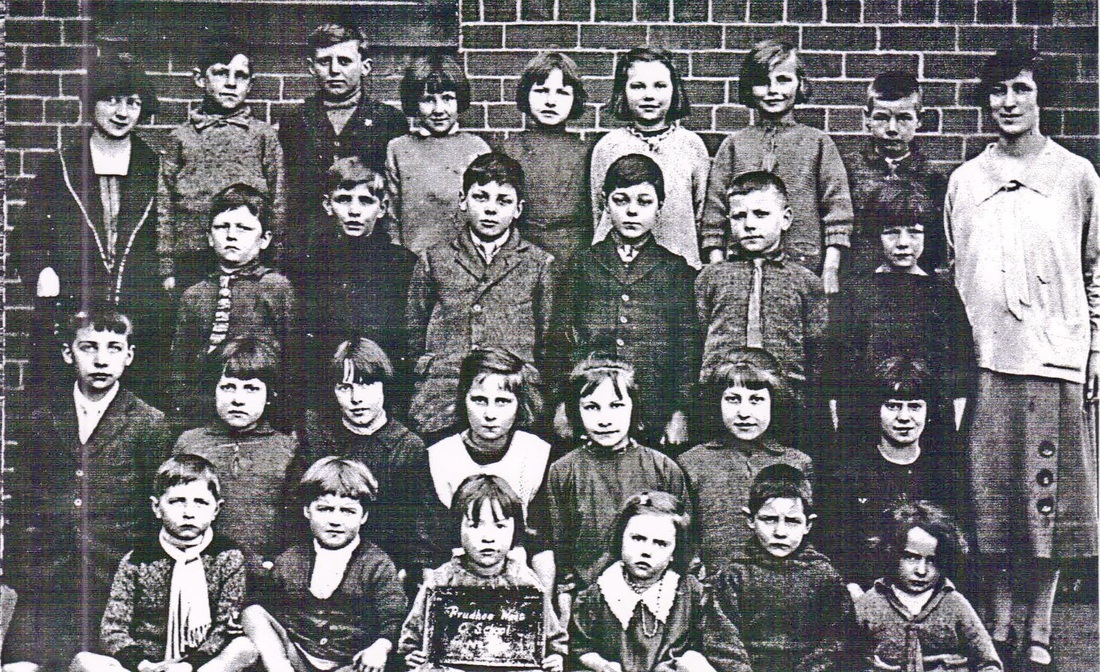 In 1937 a Woodwork Centre opened at Eltringham School and it was arranged that twenty boys from the West School go there in the mornings and another twenty for the afternoon session. Later a Singer Sewing Machine arrived - “for use by the girls”.

Ralph Brady retired in December 1937, having been headmaster at the school for thirty years and was succeeded by Robert Redhead who guided the school through World War II. He was succeeded, in turn, by Mr Mitchell, then Mr Haddow and Ian Nelson.

With the building of the new Secondary School on Moor Road and then the implementation of the three tier system the school at West Prudhoe became a First School. Ian Nelson was transferred to become the first head teacher of the new Highfield Middle School and was replaced at Prudhoe West by Mr R E Wood, the well-known Tynedale cricketer. On his retirement, Mr A Keenleyside, the present head teacher, took over.

Education philosophies and practices have changed over the years and will continue to change. The underlying qualities of service, dedication and integrity, which were cultivated and maintained by teachers like Mr Brady and his successors, have not  changed. If, today, he were able to visit the school which he opened ninety years ago, and led for a third of that time, Ralph Brady would be proud of the legacy which he left to Prudhoe.