Photographs relating to this article, including those in this extract, may be found in Gallery 4.2.1
The school was created in 1874 by the Mickley Coal Company and was on the site now occupied by Centre Design. The staffing was a master and three supply teachers but at times, due to illness and disruptions in the train service, it was reduced to the master and one teacher with classes having to be doubled up. The first master from 1874 to 1884 was Mr Thomas Falconer. The pupils were from Low Prudhoe and Hagg Bank but at times when the Tyne was in flood the Hagg Bank children were unable to attend.

When it opened the school had an average attendance of 165 but by Friday 13th February 1885 the school log reports “A capital attendance - the highest we have ever had 180.7”. Absences however were quite commonplace and in 1885 it was reported that children were staying away on accounts of washing, nursing, going on errands, minding the house and other trivial excuses. The school log states that the Hexham Attendance Committee was unable to cope with the “evil of bad attendance” and later reports that parents seem to send their children to school or absent them when they please. Among the less trivial reasons for non-attendance were lack of boots and one pupil suffering from St Vitus Dance.

The pupils who did attend did appear to work well and on Friday 4th September 1885 the school was given a treat of “tea etc.” for diligent work and good exam results. The following year, 1886, it was anticipated that the exam pass rate would be 95% (it was in fact 93%) and in the same year the infants were reported to be doing well in reading, writing and arithmetic. The infants’ furniture however was described as “quite unsuitable for infants, there being no backs in the seats and no desks fit for young children to use”. While the standard at that time may have been considered high, there were exceptions and in 1885 two children aged seven did not know their alphabet while others were recorded as being “dull” and in some cases “imbecile”. On the disciplinary side, one boy was expelled in 1889 for swearing and “being thoroughly incorrigible” and children were also sent home for being unclean, one child returning the following day and being reported as “not much cleaner”.

Inspectors visiting the school reported not only on the academic achievements but also on the sanitary facilities. One report on 30th September 1889 saying that “there is an offensive smell about the boys offices” and in June 1892 stating that the privy seats were very high and suggesting that the privy may be furnished with steps. On 14th December 1905 lessons commenced in hygiene and temperance and after the first lesson it was noted that an improvement was shown by several children who were habitually dirty.

Disease was prevalent and the school was occasionally closed down due to epidemics. In 1910 it was closed from 24th April to 1 8th May due to measles, and on re-opening the attendance was so low (only 45%) that the closure was extended until 25 May. In September 1913 one pupil died from diphtheria and in March 1914 the school was closed for two weeks due to scarlet fever breaking out. In November 1918 all Prudhoe schools were closed by Dr McCoull, the Medical Officer of Health, for two weeks and Low Prudhoe School was then closed until 6th January 1919 on account of a flu epidemic. One week later the headmaster, Mr G Wilson, reported that in the last three and a half years there had only been about thirty weeks when the school had been fully staffed and two weeks later there was only himself and one other teacher available to keep the school going. Five weeks later on 3rd March the school was closed for a further three weeks due to another flu epidemic. Two further closures due to epidemics were reported, one from 11th November 1920 to 10th January 1921 (scarlet fever) and from 19th January 1922 until 2nd February on the orders of the Medical Officer of Health due to another flu epidemic. When the school did reopen after the closure, there was poor attendance due to an outbreak of chickenpox!

Notable events between the two World Wars included the children being allowed into the schoolyard to see the new British Airship R32 fly past (8th October 1920); children taken out to view the eclipse (8th April 1921). On 25th April 1921 the feeding of children commenced with breakfast as well as dinner being served to “necessitous” children. The feeding took place in the nearby Wesleyan schoolroom. In October 1934 milk was supplied at 1/2d per bottle.

Empire Day and Remembrance Day were both strictly observed and on several occasions the children’s conduct on these days were recorded as being exemplary. On 24th March 1921 it was recorded that on Empire Day “patriotic airs were sung”. Other patriotic occasions included holidays on 28 February 1922 and 29th November 1934 by request of His Majesty the King to commemorate the marriages of Princess Mary and the Duke of Kent respectively. When King George V died an additional lesson was given about his reign, the school was then closed after a suitable service. A day’s holiday was granted on  l May 1937 to celebrate the Coronation of His Majesty King George VI and in 1943 on 8th April when the Royal Train carrying the King and Queen passed through Prudhoe, the pupils were taken to the wasteland near the booking office to see Their Majesties.

In October 1931 a letter was received from the Local Education Authority informing teachers that due to the state of the National Finances, their salaries were to be cut by 10%!

The first hint of World War 2 arrived in 1937 when a private circular about Air Raid Precautions was received on 2’ June. This was followed four months later when a copy of “Personal Protection against Gas” was received with a letter stating that the school was in the danger zone. The school was closed on 4th September 1939 due to the outbreak of war and group teaching took place. Two months later on 20th November 1939, the school reopened on normal lines. Attendance was 55 out of 61 pupils and the report for this occasion states “The pupils seemed pleased to be back at school and soon settled down to their work”.

The pupils and staff undertook a scheme whereby each week they sent a box of cigarettes to some member of the Forces and it is recorded that on 13th February 1940 a former scholar, Stephen Pearson, now serving on HMS “Resolution” called at the school to personally thank the children for his gift.

In June 1940, a request was made by soldiers guarding Ovingham Bridge for the loan of a table and four desks to use as seats. School staff made arrangements with the Air Raid Warden to take turns in fire watching on a basis of one member taking one turn every seven days. On 7th June 1946 the school was given a holiday for Victory Day. After a short service the pupils and teachers went to the “Electric Cinema Theatre” for a free show of films.

On 2nd September 1958, the school was closed and the building was retained as a store for the Education Committee and the Local Civil Defence as an emergency food store.

The last entry in the Education Committee Property Register regarding the school was to record the fact that on 30th November 1965 the NCB terminated the lease on the land. 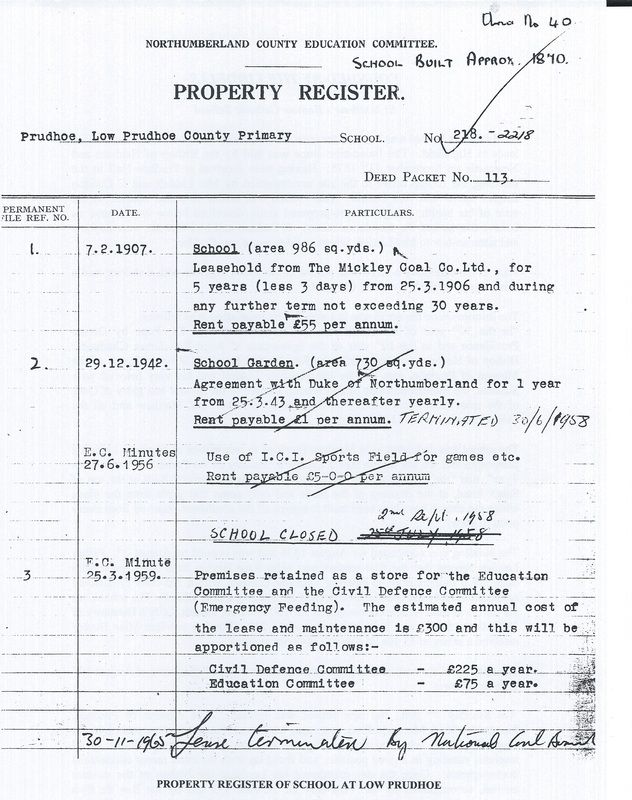