Photographs relating to this article, including those in this extract, may be found in Galleries 4.1 and 5.5
Until the growth of the mining industry on the south side of the Tyne, Prudhoe and Mickley were part of the old Parish of Ovingham. In 1823 a “Chapel of Ease” was built at Hall Yards, which was then a hamlet of Mickley. In 1867, Mickley was created as a Parish in its own right and included the whole of Prudhoe as far as Stanley Burn. The need soon arose, however, for services to be held in Prudhoe, as a mission district. These were taken by the Assistant Curate of Mickley who generally resided in Prudhoe.

The increase in Prudhoe’s population, due to the opening of West Wylam Colliery in 1866, created the need for a new Parish for the area, and a site for a church was given by the Duke of Northumberland. The original proposal of 1879 was that Prudhoe should become the Parish Church for both Prudhoe and Mickley with the latter ceasing to be a Parish in its own right, but becoming a “Chapel of Ease” to be served by the clergy of Prudhoe - the reverse of the situation which existed at the time. This idea was opposed most strongly by Mr Wrightson who was the Patron of St George’s, Mickley. The scheme was dropped and arrangements went ahead for Prudhoe to be constituted a separate Parish.

Commissioners further represent that it appears to us to be expedient that the banns of matrimony should be published, marriages, baptisms, churchings and burials should be solemnised…...we humbly pray that your Majesty will be graciously pleased to take the premises into your Royal consideration and make such an order with respect there to as to Your Majesty in your Royal Wisdom shall seem meet.”

The Duke of Northumberland had laid the church’s foundation stone on Wednesday 27th August 1879 and the building, which cost £2151, was paid for by public subscription but mainly due to the financial assistance of the Duke. The church was consecrated in October 1880 by Bishop Lightfoot and finally constituted a separate Parish following the Order of Council described in “The London Gazette”. The Parish remained in the Diocese of Durham for a year, as it was not until 1882 that the Diocese of Newcastle was created. Prudhoe’s first vicar was the Reverend J A Collingwood Maughan who left Mickley, where he was the vicar, to take up the post. The Rev Maughan was succeeded in 1902 by the Reverend W H Ainger who, during his four years as incumbent, was very active in providing extra facilities for the Parish. The organ was transferred from the south transept to a chamber in the chancel and a vestry was built through the generosity of Colonel Swan of Prudhoe Hall. The vicarage, now used as a nursing home, was built in 1884 at a cost of £1625.

Plans were afoot for the building of a Parish Hall and the Parish Magazine of February 1903 records a public meeting held on January 8th in a room “kindly placed at our disposal by Prudhoe & West Wylam Stores”. The article goes on to record the appointment of a fundraising committee which consisted of the Vicar, Rev H H James (Curate), Messrs Bell, Lawson, Thompson, Watson, S Bates, Miller, Grant, Harris, Johnson, Wardle, Wilkinson, G Harkness, R Lowden, T Rowell. Mr TM Falconer (the headteacher of the National School) was appointed secretary and Mr J Douthwaite (the chemist), treasurer. The vicar announced that they had £151-8s-7d already in the bank and a concert in the Drill Hall had added a further £16-16s-0d. Substantial promises of donations were made, cg £50 from the Rev & Mrs Ainger, £15 from Rev James (curate), £5 from the Lord Bishop of Durham, £20 from Mrs Glover, eight donations each of £10 (one of which is recorded as “A Friend”), four of £5 and two each of two guineas (one of which was recorded as from a “well-wisher”). Further fundraising efforts being planned were “a concert with theatricals kindly given by Mrs Clayton & party”, a dance to be held in St Matthew’s Hall. Prudhoe AFC were setting aside the gate money from their match with Willington in the Northern Alliance League for the fund. The Hall was due to be opened on 1st June 1903 “unless anything unforeseen arises to stop the progress of the work of furnishing”. For the evening a dance was being arranged “to test the excellence of the floor”. It is incredible that such a major project could be conceived, financed and built in such a short period! 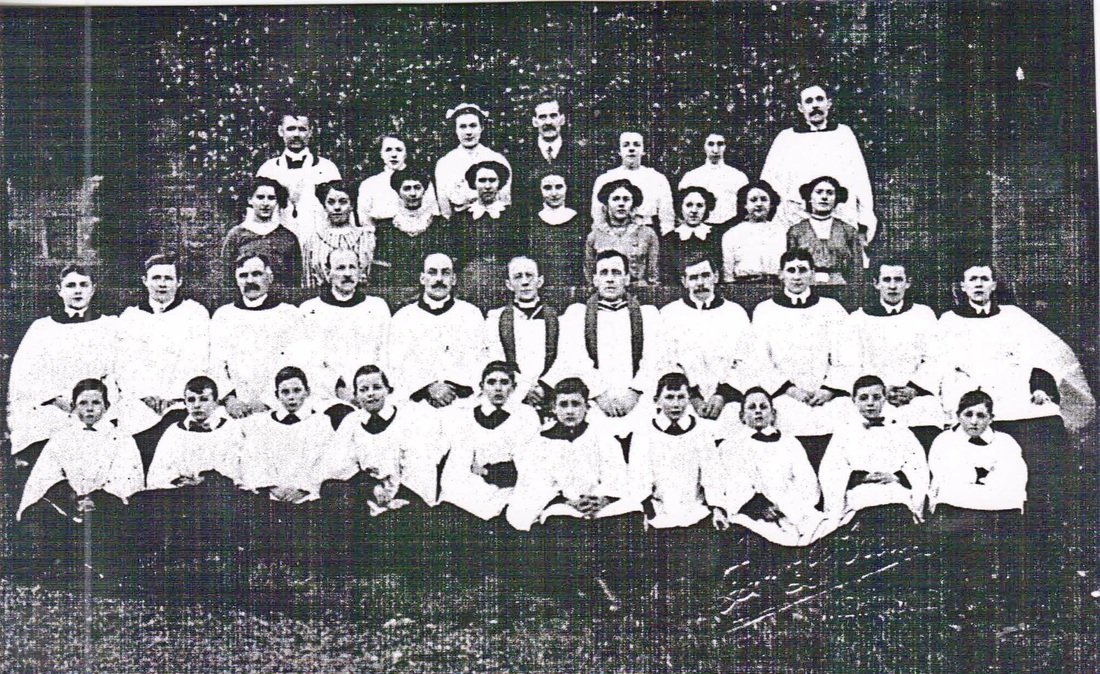 St. Mary Magdalene's Church choir c. 1909
The vicar is the Rev Harley Williams
The church was the hub of many associated activities. The Church Lads’ Brigade was a strong movement. In November 1902 it is recorded that the Brigade held a successful social in the Drill Hall and in the previous month a shooting competition was held. The first prize, given by Captain Lee, was awarded to W B Anderson with a score of 22 out of 25. Second was F Bates with 19 and T Cowen was third with a score of 18.

The Girls’ Friendly Society was also active, certainly as early as 1907 as was the Church Men’s Society. In this year the Parish Magazine records a visit by the Church Army van, under Captain Jackman, which visited the Parish Hall and held open air meetings at West Wylam and Low Prudhoe and visited local houses.

The church also ran both a football and a cricket club. In 1902 the football club recorded its kindness to Mr Bell in granting them the use of a field. This was Johnny Bell, whose name is preserved in the local name of “Johnny Bell’s Lonnen”, the road above the Castlefields Estate linking West Wylam and Prudhoe Bank. Johnny Bell lived in Broomhouse Farm and appears to have been quite a character. On one election day he decked out the tail of his horse with the favours of his political party. At the Dr Syntax, however, some of his pals changed the ribbons for those of the opposing party and as he rode away he was greeted with cat calls of “Johnny Bell’s a turncoat!”

Broomhouse Farm c. 1900
Broomhouse farm was the last farm in the Parish of the “big six” which comprised Castle Farm at Low Prudhoe (on which the ICI factory was built), Bank Top Farm (centrally situated opposite the church), Colliery Farm (in mid Prudhoe), Pipe Works Farm and Village Farm at Eltringham and Master’s Close Farm (which was built on in the 1960s). Broomhouse Farm house, a fine example of a Northumberland farm house of the nineteenth century, has been preserved as part of the Castlefields Estate. The orchard which lay in a semicircle below the level of the farmyard contained the largest collection of apple tree varieties in the country other than in Kent. The gardens of the farm used to be landscaped in a classical style with herbaceous borders. Historically all the farms in Prudhoe were highly productive since the land on the Tyne Valley floor and the terraces in Prudhoe was defined as Grade I (a quality of land which is only found in limited amounts in the country).

The football club must have been in abeyance for a while since the article in the Parish magazine states that it had “again been started with F Bell as captain and Rev H H James (secretary and treasurer). Through the kindness of Mr F M Laing, a room was available where our boys can meet twice a week, on Tuesdays and Thursdays”. 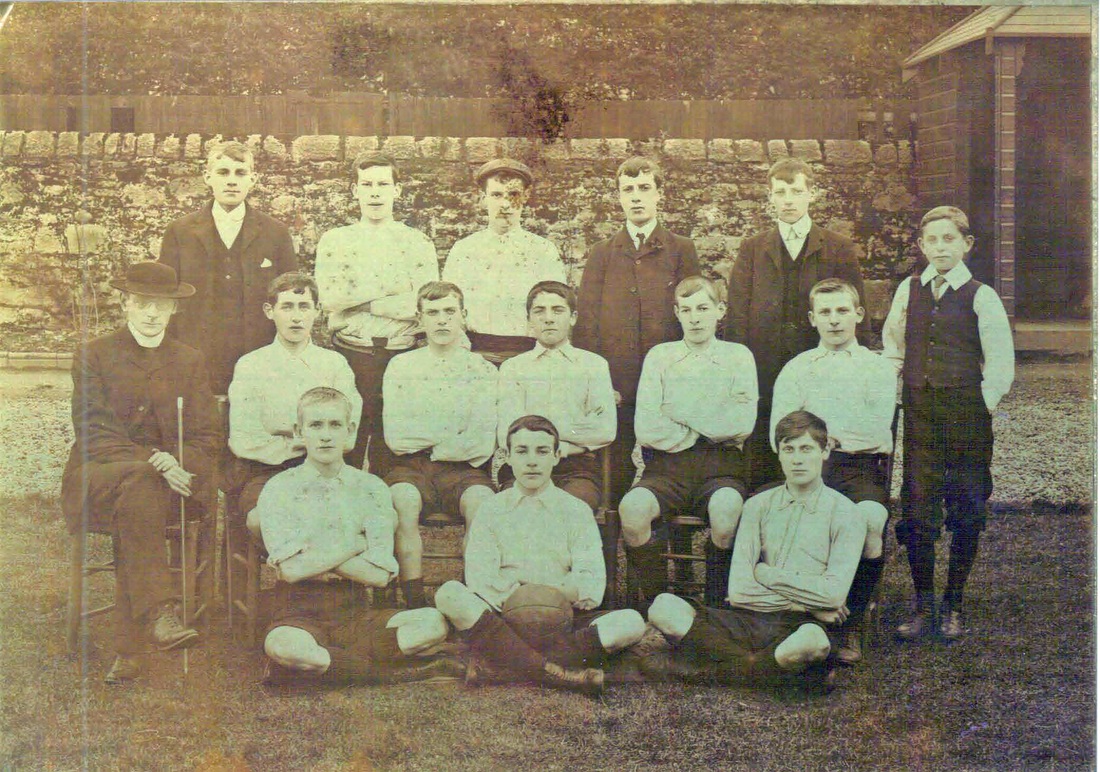 The 1923 Bazaar, held in the grounds of Prudhoe Castle, must have been a very substantial affair since the programme produced consisted of some 24 pages, including adverts and a potted history of the parish and list of the clergy up to that time. The programme included the names of the helpers on each stall and interesting rhymes and information about each stall’s theme. The Busy “B” Stall, for example, advertises its wares as follows:

“Miss Douthwaite and the Misses Bates have here a ‘Hive’ of Brushes, Bags, Baskets, Bowls, Basins, Books, Balloons, Bracelets, Balls and Beads” with an NB “Buffaloes, Beavers or Boa constrictors are not kept in stock but can be ordered”.

The following jingle accompanies the advert:

“Other Bees are alive
And bring to their Hive
What they gather, to turn into Honey!
The B B at this stall
Don’t make Honey at all,
But they want to be turned into
MONEY!”

The work party, which consisted of twelve ladies, declared on their advertisement that:

“Be it known to all,
That the goods on this stall,
Are the product of many a meeting
Where mothers and matrons
Discussed, in white aprons,
The merits of calico sheeting”.

The programme is indicative of the great deal of commitment, which must have gone into what must have been a major enterprise. 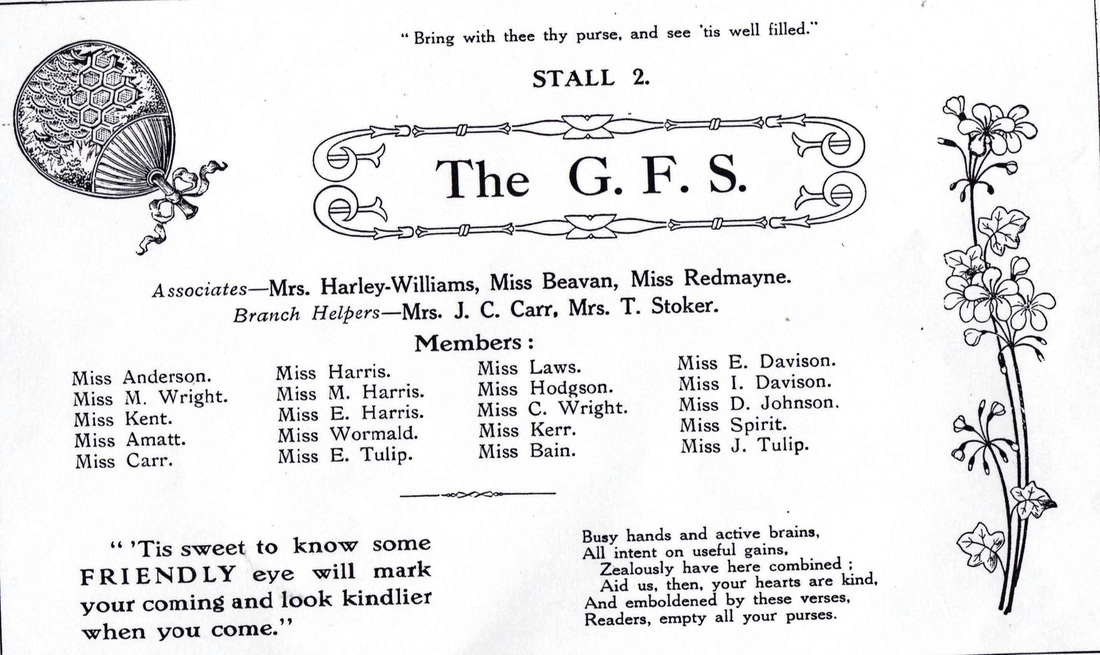 From St Mary Magdalene Church Bazaar Programme 1923
Entertainment was provided, both in the afternoon and the evening by the Prudhoe Military Band, conducted by Mr J G Appleby, and in the evening The Prudhoe Gleemen sang in the lower garden of the Castle.