Photographs relating to this article, including those in this extract, may be found in Gallery 4.1
A stone on South Road in the wall of Prudhoe House (once the meeting place of Prudhoe Council) marks the place where John Wesley preached during his first visit to Prudhoe on 27th June 1757.

It is surprising to note that he began his preaching there at five o’clock in the morning! This was so he could catch the workmen on their way to the fields, since Prudhoe was purely an agricultural village at the time. After this early start, Wesley took breakfast with Thomas Newton at Prudhoe Hall Farm.

It was on a plot purchased for a nominal sum of five shillings from Squire Anthony Humble of Prudhoe House that Prudhoe’s first Methodist Church was built in 1757. It is said that Wesley himself staked out the site behind South Road, just above the Locomotive Inn. This chapel is marked on the 1859 map. Apparently, John Wesley preached in Prudhoe on four occasions.

Wesley’s work in the North was continued by Joseph Cownley and Christopher Hopper and the beginnings of actual Methodism in Prudhoe are attributed to Cownley. On his way to Prudhoe in 1792 Cownley caught cold which brought on a stomach complaint. It is reported that he preached in Prudhoe “in the greatest agonies of pain” and upon returning to Newcastle he died on 8th October 1792.

It was in 1865 that the Newcastle upon Tyne District of the United Methodist Free Church decided to spread the message by undertaking a missionary campaign amongst the population of the rapidly expanding Prudhoe area. The Rev George Waite from the London Circuit was appointed, though he was little more than a youth at the time. He arrived in Newcastle and began to tour the district on horseback and eventually decided to pitch a tent in Prudhoe. His memoirs record: “On the first Sabbath I preached in the open air to about a hundred people who had gathered to hear the Word and the impression produced in my mind is thus commencing my labours will never be effaced”.

The Rev Waite hired a room and with the help of a pitman made some rough benches and then invited the neighbours to the service. He wrote: “A very gracious influence attended these and a Church was formed. Although we commenced without any certainty of members, yet five soon united themselves with us and from that time we have been steadily progressing. We now number nineteen members, with eight on trial and, when we take into consideration the short time we have occupied this field, we are much encouraged”.

He further records: “We have now commenced a new chapel. It will seat about three hundred people and will be erected at a cost of £400. We may truly say, “What hath God wrought?” Yet we are not satisfied. We are still expecting. The members will manifest earnestness in the cause of Christ, and the Church, as far as its spirituality is concerned, is in a flourishing condition. We are all earnestly working and praying that the Lord would do even greater things than these” — such was the prayer of those original members in 1866.

The Church, which we know as West Road Methodist Church, was opened in 1866. The Rev R Chew of Newcastle, preached in the afternoon and a tea was provided in the old School Room for over three hundred people. A Public Meeting was held afterwards in the new chapel, Mr George Luckley of Newcastle presiding. He told the congregation that the church had been erected under the auspices of the Newcastle District of the United Methodist Free Church to supply the spiritual wants of the rapidly increasing population of Prudhoe and the neighbourhood. The meeting was also addressed by Mr Robb of Hexham, Mr Patterson of Sheriff Hill, Mr Green, the ex-mayor of Tynemouth, Captain Armstrong of South Shields, Rev R Chew of Newcastle and Mr Bainford of Gateshead.

In 1870 Prudhoe appeared for the first time on the list of circuits in the Minutes of the Annual Assembly. After occupying a place among the home mission stations, and drawing considerably upon the Missionary Funds, and after several years of successful hard work, Prudhoe had been made the nucleus of a small Circuit which was made up of Prudhoe, Mickley Square, Harlow, Greenside, West Wylam and Kiln Pit Hill churches.

In 1907 the amalgamation of the United Methodist Free Church and the Methodist New Connection took place and the West Road church was named Prudhoe United Methodist Church. Ten years later a fund was set up to install a pipe organ. This was built by Nelson’s of Durham at a cost of £275-15s-0d. The first organist was Mr H White with Mr A Glendinning as assistant.

Electric lighting was installed in the church in 1941 and five years later the pulpit was moved so that entrance could be obtained at both sides and the choir provided an electric blower for the organ. Extensive additions to the church took place in 1996-7.

As Methodism took a strong foothold in Prudhoe, many smaller chapels grew up to cater for the different sections of Methodism. Many were known locally by the names of the ‘leading lights’ of that particular place of worship e.g. Carr’s Chapel at West Wylam, Shilling’s Chapel at Edgewell and Cameron’s Chapel at Eltringham. 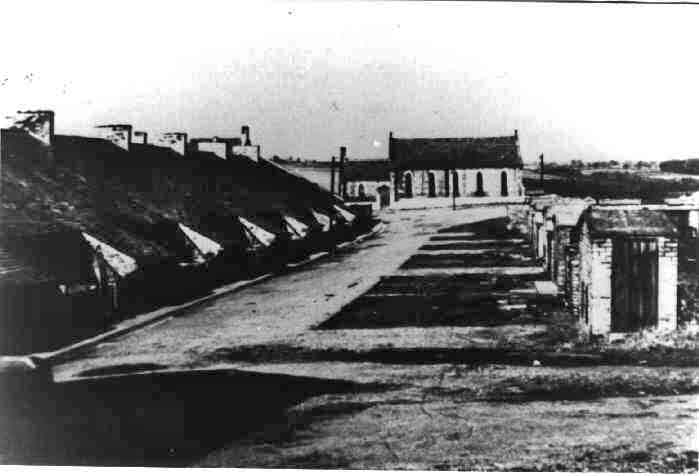 Cross Street, West Wylam with Carr's Chapel in the background and the 'netties' on the right
Cross Street was the street where the larger families were housed
West Wylam had two chapels — the Trinity Methodist Chapel (Carr’s Chapel) at the bottom of Cross Street and the Ebenezer Chapel which is still in use. The Ebenezer Chapel was known locally as “The Ranters”. In the 1930’s one of these old ‘ranters’ still survived. During the service, whenever he thought it appropriate, he would shout out “Hallelujah! Praise the Lord” etc. (much to the amusement of the children in the congregation). Low Prudhoe’s Methodist Church had its foundation stone laid in 1879 and, at the top of Station Bank, just behind Front Street, a Pentecostal Church operated. In pre-World War II years it was a common sight to see members of its congregation evangelising and singing revivalist songs at the top of Station Bank. This building subsequently became Bewick Motor Cycle Shop. Current position?

Front Street itself had two chapels, in addition to the West Road Church. St John’s Methodist Church Hall, built in 1871, was demolished to make way for a new library. The Wesleyans continued to use the original 1757 Chapel as a schoolroom until it became too small and was converted into a dwelling house. As years went by the 1871 building, in turn became too small for Sunday worship, so in 1898 a new Chapel was built where the Factory Shop now stands. A manse was subsequently built beside the Chapel in 1907 and its first occupant was the Rev E G Loosley. In addition to these, a small wooden chapel existed in one of the rows of houses at Eltringham and was known as Cameron’s Chapel. Though not a Methodist chapel, mention should also be made of The Gospel Hall at Edgewell. This mission was of Plymouth Brethren origin and was known as Shilling’s Chapel. 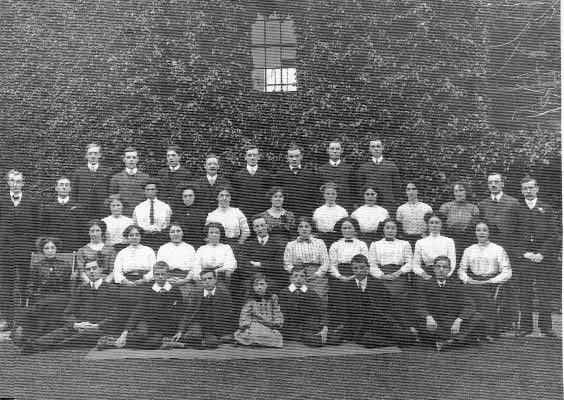