Photographs relating to this article, including those in this extract, may be found in Galleries 5.2 and 7.1
Mining in the area began to decline slowly in the 1930’s and as the local collieries closed miners began to be bussed to other larger collieries in the region until they too closed down. However, in 1941 work began on the building of a factory for ICI at Low Prudhoe below the castle. This was part of the war effort drive and the plant was set up to manufacture fertiliser. This gave much needed work to both men and women in the town. 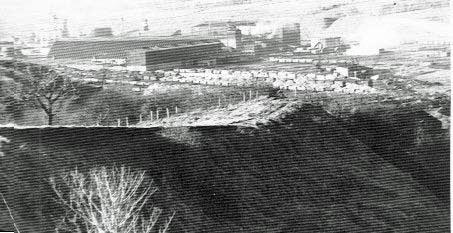 ICI Works from the Spetchells c. 1955
The ICI factory was built on the site of Prudhoe Castle Farm (7.1.1.04) which, according to the register at Alnwick Castle Estates Office comprised 251 acres in 1883 and was owned by His Grace Algernon, the 6th Duke of Northumberland. At that time the land had been rented out at £400 per year to George A Laws and Josh Burnett, who lived respectively in Prudhoe Castle and in Orchard House.

In 1888, George Hare Spraggon had taken over 201 acres of the original farm and three acres were given to the village of Low Prudhoe as a recreation ground. It was probably here that the local cricket team was formed.

In 1897 Isaac and Hannah Johnson became tenants of Prudhoe Castle Farm which now comprised 180 acres at £315 per year rental. The Johnson family farmed this land until it was taken over by ICI in 1941 (Isaac & Hannah’s son John was killed on 6th April 1918 at the age of 20. A lectern in St Mary Magdalene Church was erected to his memory). Thirty acres were now rented to the Mickley Coal Company for £100 a year. In 1869 subsidence caused from the West Wylam colliery had caused damage to the south east of the farm, hence the above rental took into consideration both “smoke and colliery damage”.

In 1921 the land worked by the farm was further reduced to 177 ½ acres though there appears to be no record of where the additional acreage went, though in March 1938 two and a half acres were sold to Prudhoe Urban District Council to build the Castle Lea houses.

Orchard House was the farmhouse to Castle Farm. The hill behind it was known as Orchard Hill. Presumably this was the apple orchard which was vandalised by William the Lion, King of Scotland, in 1174 when he was frustrated at being unable to take Prudhoe Castle. 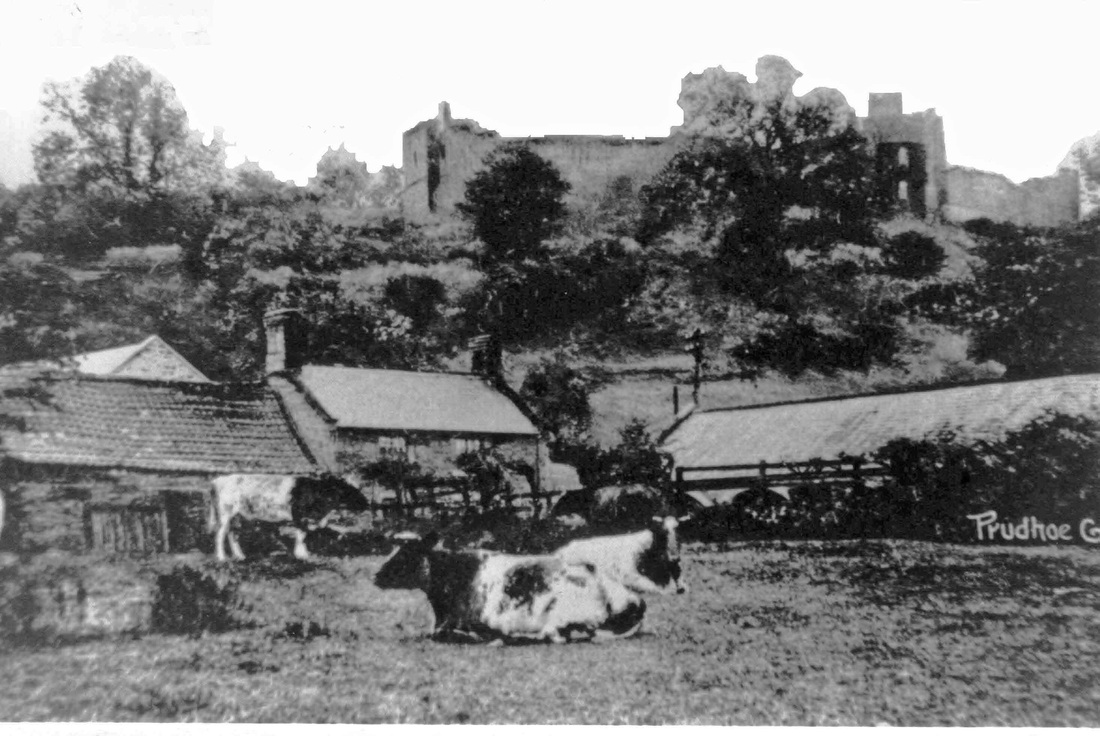 Prudhoe Castle and and Orchard House Farm c. 1920
The last tenant of the farm was Thomas Frederick Johnson. The greater part of the land was sold by the Duke of Northumberland to the Ministry of Supply to build the ICI Chemical Works to supply nitrogen as fertilisers. Building of the plant began in January 1941 and ammonia was first manufactured in Prudhoe in November 1941 but the sulphate plant was not fully operational until January 1942. At this time the factory offered employment for nearly a thousand people.

Chalk was the waste product from the plant and this began to accumulate and was tipped to form long chalk hills along the riverside to the east of the factory on land known locally as “The Spetchells”. We have been unable to find the derivation of this name but two theories have been put forward: one that it was a “special place”, perhaps good quality land and another being that it was a “speaking place” — a meeting place where local disputes were resolved. Moves were made to remove the heaps but it was considered that they were now areas of special habitat for flora and fauna; also they provided Ovingham residents with a screen from the factories which have now grown up on the Low Prudhoe Industrial Estate.

The legacy of chalk on The Spetchells is in spite of endless convoys of lorries which transported as much as was needed to farms between Yorkshire and Scotland and across to Cumbria. The chalk was utilised to spread on farmland in an effort to increase the farms’ yield during the wartime food shortages. The main contractor in moving the chalk waste between 1949 and 1964 was Bill Thompson who built up his considerable business (Thompson’s of Prudhoe) as a result of this by-product. At the peak of the chalk removal it was estimated that 300,000 tonnes per annum were removed. Today The Spetchells are said to consist of 2 ½ million tonnes - the name seems to have transferred in popular usage from the land on which they stand to the actual chalk tips. The name is also preserved in ‘Spetchells’, one of the cul-de-sacs in the Castlefields Estate, and in the 'Spetchells Centre' on Front Street.

The final use of one of the buildings of Orchard House was as a nightclub (2.1.6.03), formerly called La Hacienda, and latterly owned by Paul Squires, a comedian and called The Follies. The building was burned down in 1991. 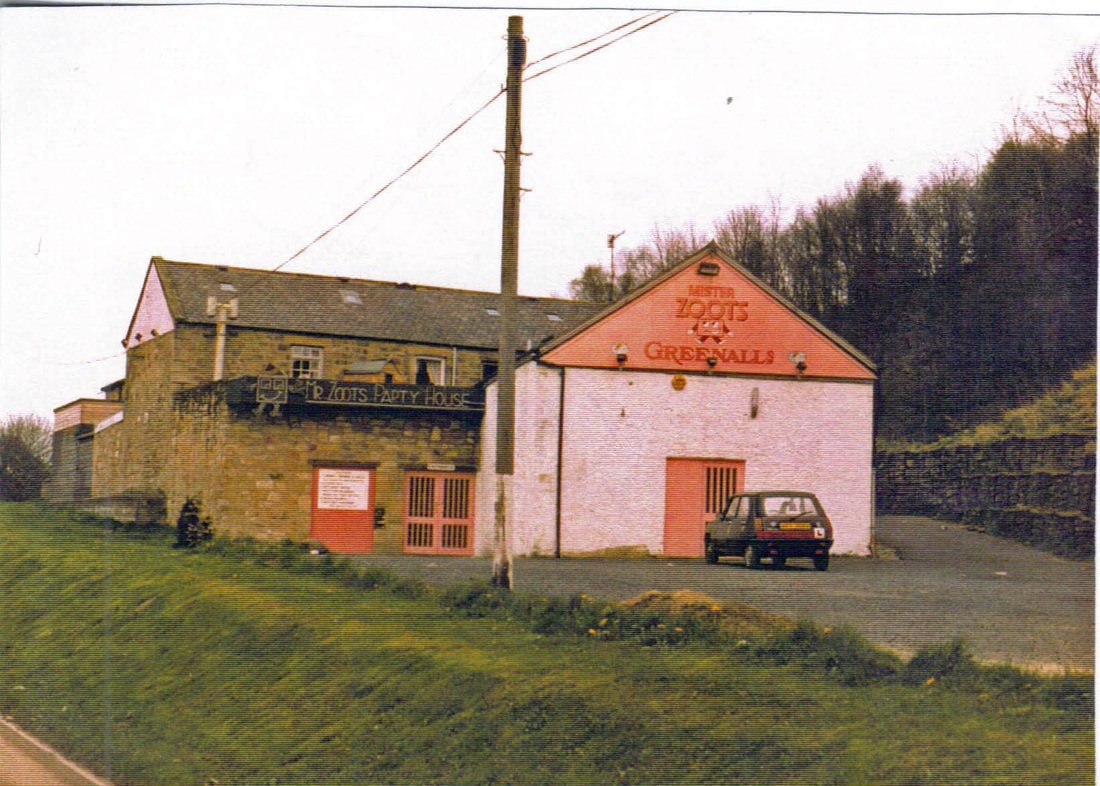 Night club Princess Way 1987
During its lifetime it had various names. At this time it was Mr Zoot's. The building was formerly the ICI staff social club.
The closure of the ICI Sulphate and Sulphate of Ammonia plant began in May 1965 when the production of sulphate ceased and the production of ammonia was completed in 1967. It was the trend towards the use of highly concentrated fertilisers which was the major factor in the demise of the Prudhoe plant. As a result of the closure a handful of employees were transferred to Teesside.

The re-development of the ICI site as a modern paper mill by Kimberly-Clark began in 1969. It was designed to be the most modem paper mill in Europe at a cost of £10 million.

On 29th November 1971 the mill was officially opened by HRH Princess Anne (3.4.02) and the road alongside the mill was named Princess Way to mark the occasion. 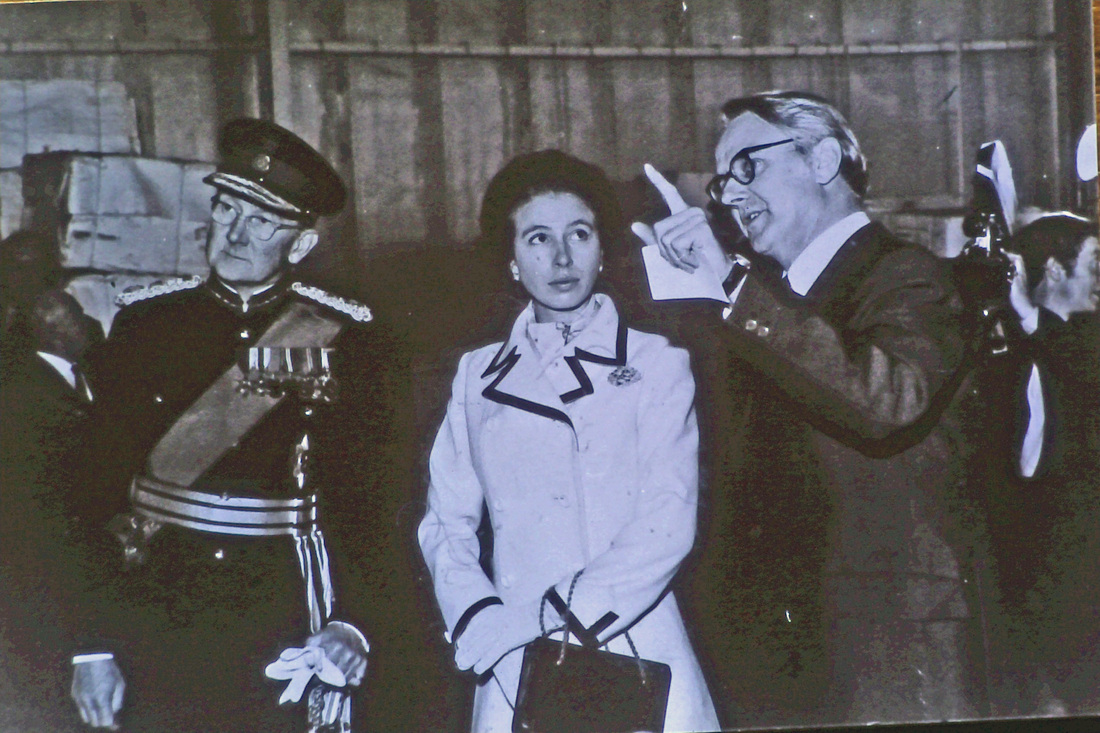 HRH Princess Anne opening Kimberley-Clark Paper Mill 1971
In less than two years the main part of the Prudhoe Mill was fully operational with a workforce of over 400. The paper products of the mill were exported all over Europe as well as being distributed throughout Britain. Prudhoe’s machines were the fastest of their kind in the world, capable of making tissue at the rate of a mile per minute.

The mill was expanded in 1979. The multi-million pound investment ensured the installation of a second paper-making machine and as a result the workforce was expanded to 950.

On 16th September 1996, the Swedish company, SCA, took over the Kimberly-Clark factory and the factory currently employs about 550 people.

Alongside the paper mill a considerable Industrial Estate has been built up consisting of small factory and business units.