Photographs relating to this article, including those in this extract, may be found in Gallery 3.5
Prudhoe has a long military tradition. The Drill Hall beside Swalwell Close has recently had other uses, but the first Drill Hall was on the Front Street. The site is now that of the Red Brick House Nursing Home but the previous building which took over the site of the first Drill Hall was the Electric Cinema (later known as the Rex). This, in turn, was converted to become Prudhoe’s first swimming pool.

The first photographic record of Prudhoe’s fighting men is that of the Prudhoe men who volunteered to fight in the Boer War with the 5th Northumberland Volunteers. 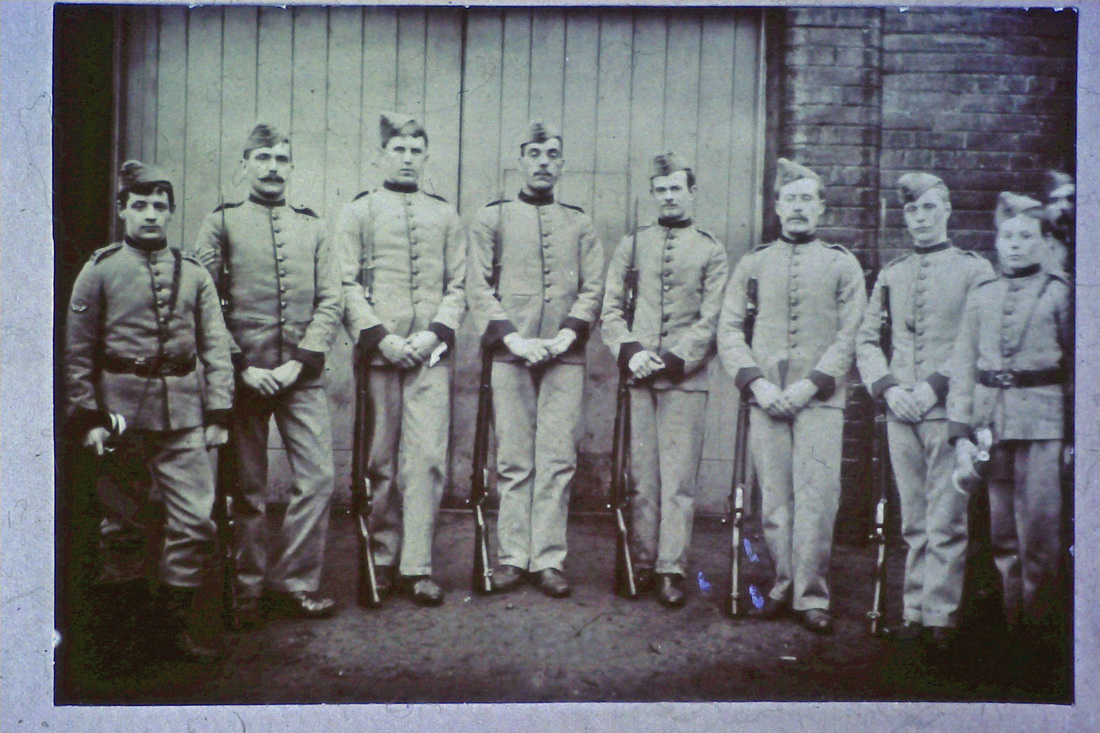 Boer War volunteers c. 1900
Two of the men portrayed in the picture were killed. The others returned to a hero’s welcome in May 1901. All the local businesses closed early and the pits worked an early shift to allow over two hundred people to attend an evening reception in the Drill Hall. A number of years ago the photograph appeared in the local press. As a result, three of the soldiers have been identified. Fourth from the left is James Wanless. Also in the picture are Billy Batey of Cross Street, Mickley, and “Blind Walter” from High Mickley who used to sit in Conway’s barber shop (on “Coulsons Comer”) every morning to have a chat with the customers. Billy Batey volunteered for the Boer War at the age of 15 and was in action when he was 16. He subsequently served in the First World War being wounded at the Somme. He was the father of a very large family, one of whom was born when he was fighting at the Somme. The child was christened Albert Somme Batey.

The First World War brought a surge of volunteers from the growing Prudhoe Township. The photograph below   is of Prudhoe’s raw recruits being marshalled by Sergeant Sykes before being sent off for mobilisation.

These young men set out with great hope and pride in serving their King and Country, but the Northumberland Fusiliers suffered enormous losses. The regiment raised fifty-two battalions during the war, but on July 1st 1916, in an attack on La Boiselle, the Northumbrian Brigade lost 70 officers and 2,440 men. Four commanding officers were killed, and the 19th Battalion alone lost every officer. 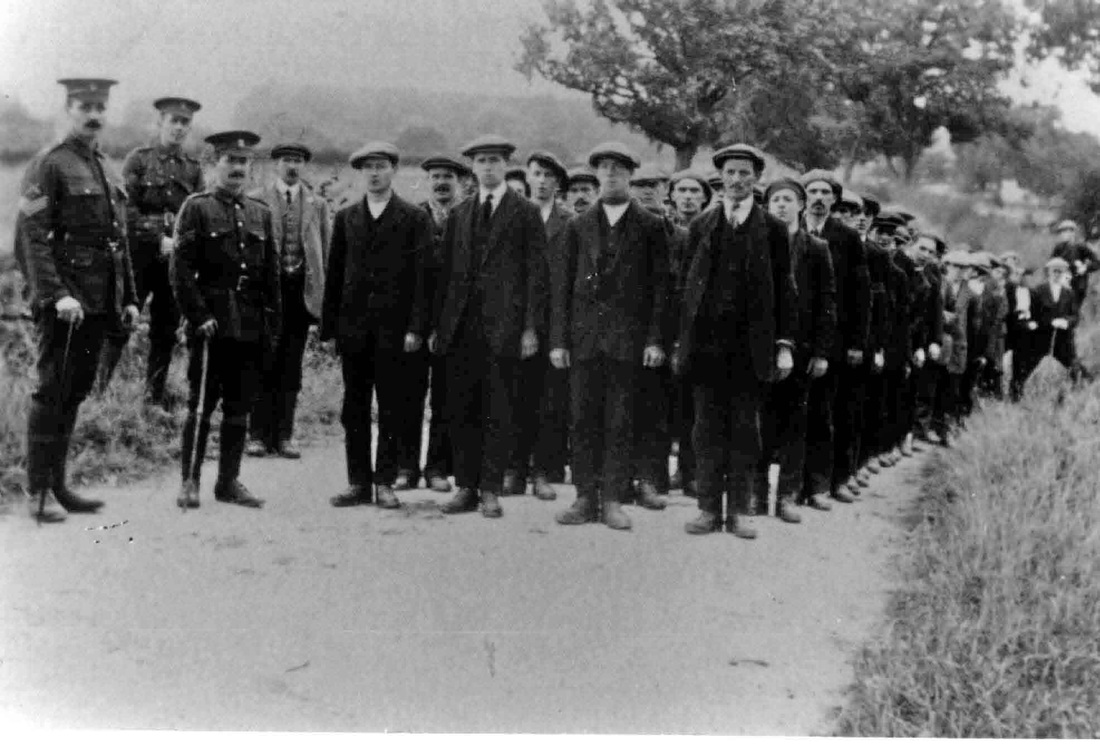 World War I volunteers on Moor Road being drilled by Sgt Sykes c. 1914
Private Alby Gibbons of “D Company” of the 4’ Northumberland Fusiliers, a Prudhoe lad, wrote several poems at the Front. These were printed and sold locally at a penny each initially to provide cigarettes for the local soldiers at the Front and later to aid the working party which provided the soldiers at the Front with much needed extra clothing. 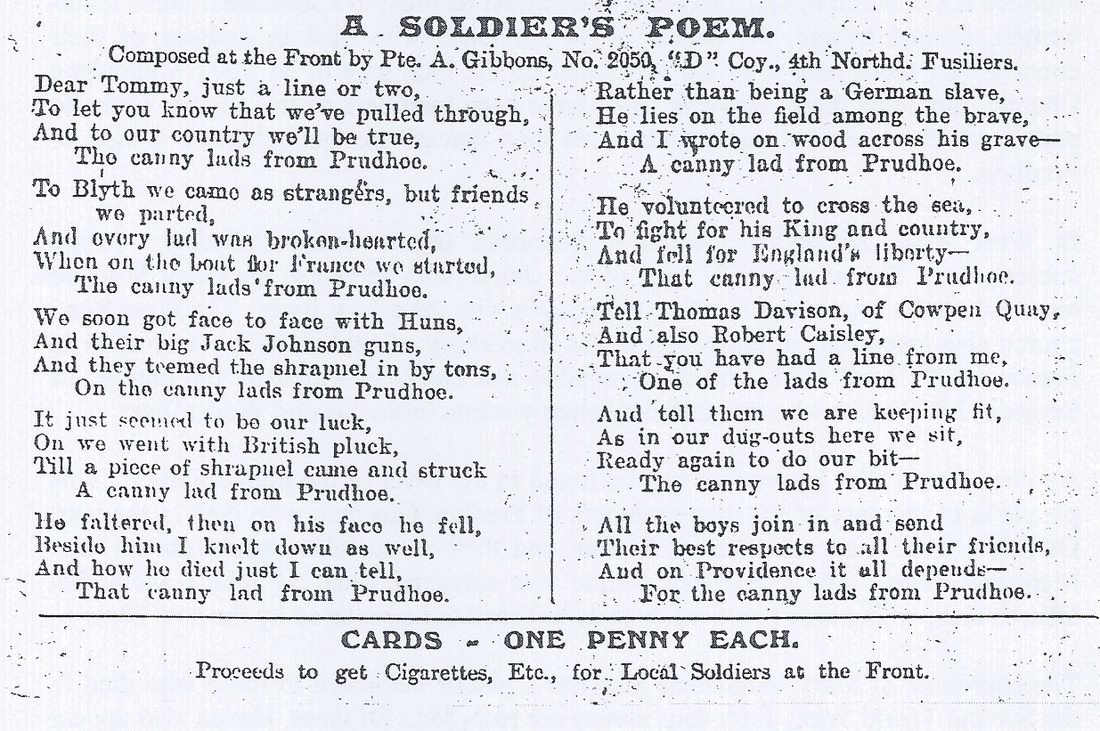 A Soldier's Poem
Written by Private A Gibbons of Prudhoe
On one morning alone during the war no fewer than ninety telegrams were delivered to Prudhoe homes announcing the death or wounding of fathers, sons or brothers of the 4th Battalion.

At the end of the war temporary wooden huts were built on the south side of the road opposite the West Wylam Colliery houses (where Priestclose Cottages now stand). These were built to accommodate the returning soldiers and their families until permanent housing could be found.

In Prudhoe, as in all parts of England, the memory of those who gave their lives in the Great War was enshrined in war memorials. The lych gate of St Mary Magdalene Church was raised by subscriptions from all religious denominations. It displays the names of 93 Prudhoe lads who fell in the war, and was unveiled by the Duke of Northumberland on 19th October 1921. In the church itself a memorial tablet, given by Mr Redmayne had already been consecrated, with these 93 names on it, on 18th August 1920 by Bishop Ornsby. A handsome brass lectern was given by the family of Gunner John Johnson of Castle Farm who died of wounds received in action on 6th April 1918. A tablet in the south transept was erected by the mother, brothers and sister of Private George Kent who was killed in action in France on 5th February 1916. Both of these young men had been choirboys and members of the Church Lads’ Brigade. Brass flower vases for the church were given by parents and relatives of Lance Corporal L B Buckham and Privates T Wright, R Ellwood, A Hankin and R H Johnson.

Prudhoe R C Church of Our Lady and St Cuthbert records, in a somewhat faded hand-written, framed tribute, the names of 44 Catholics who died in defence of their country. Of these only nine are replicated on the lych gate of St Mary Magdalene Church. Some of these, however, may have been members of the Roman Catholic parish, which covered a much wider area than that of the ‘geographical’ parish of Prudhoe.

In West Road Methodist Church a memorial organ was installed by public subscription. The names of 21 men of the church who served in the Great War are recorded on the organ case together with seven who gave their lives. The West Road church also has a pair of collection plates in memory of Stokoe Ridley who died in France on  April 1918, and an altar table and chairs provided by the parents of Sergeant J R Yielder who was killed by enemy action in the Second World War.

Another World War I memorial is a plaque is in memory of the nine members of Prudhoe Gleemen who died in the war. Of these, three were residents of Wylam and their names also appear on the War Memorial there. The Gleemen’s plaque was salvaged when St John’s Methodist Church Hall, where they practised, was demolished to be replaced by the new library. At the time of writing (2/14), the plaque is looking for a new home.

The church of St Mary Magdalene also has a plaque dedicated to those who died in the Second World War. Fifty-four names are recorded. Of these, eleven also appear on the memorial in St George’s Church at Mickley.

Prudhoe also boasted a very substantial Home Guard company as illustrated below, taken outside the Drill Hall beside Swallwell Close. 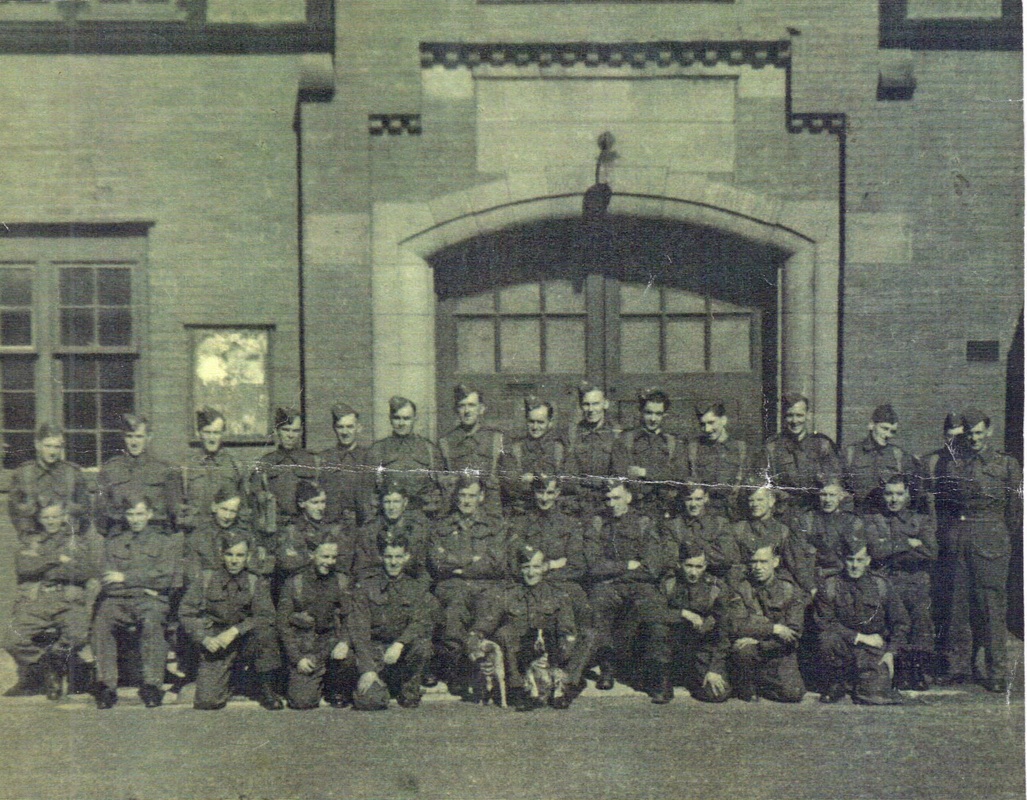 Home Guard outside Drill Hall c. 1942
Other more recent war deaths are remembered in St Mary Magdalene Church. An oak font cover with an iron rim and brass plate is in memory of Walter Keith Little who was killed in action in Cyprus on 24th March 1965. The font cover was made by the boys of Prudhoe Secondary School in January 1968.

Also in the church is a slate memorial tablet to Able Seaman Derek Armstrong who died aboard HMS Ardent off the Falkland Islands, during the Falklands War, on 21st May 1982. A plaque to his memory can also be found in Prudhoe High School where he had been a pupil.

The most recent tragic death in warfare to be commemorated in the church is that of Fusilier Kevin Leech, aged 20, of the 3rd Battalion Royal Regiment of Fusiliers, who was killed in action in the Gulf War on 26th February 1991.