Photographs relating to this article, including those in this extract, may be found in Galleries 5.1.3 and 2.4
Hannah Currey was born in 1909 at Prospect Place, Prudhoe. She started up her business as a young woman on South Road and later moved to the corner of South Road and Front Street (in premises recently used by Prudhoe Community Partnership and previously Colonnade) selling sweets and cigarettes. As business developed she began to sell fruit and vegetables which she obtained from Albert Shilling, the wholesaler, until, for some reason, she fell out with him. When the cash flow was a problem it is said that Mr Shilling would pay his creditors with ‘tomato jam’!

As business grew Hannah acquired an additional shop which was a little wooden hut on Castle Dene. Eventually this became too small for her purposes and Betty Stevenson can remember vividly how, when she worked in the shop, a local joiner built a larger building around the original one so that business continued uninterrupted. Later on this, in its turn, was replaced with a brick shop which has

since been made into a house. The wooden building was sold, with the purchaser being responsible for its removal. The shop had been so constructed that it had to be sawn in half from the roof downwards. While work was going on in the building of the brick shop a mobile van was used and was parked on the site. Because of the danger of leaving it unattended at night and for fear of arson, the van’s petrol tank was filled with water. Next morning it was discovered that this had been siphoned off. (Someone would have problems with their vehicle if they tried to use this ‘petrol’!)

When the new shop opened the van was towed to Edgewell; quite an operation as it had no brakes and defective steering. For many years the mobile van was utilised as a greenhouse for growing tomatoes.

In the 1950’s Hannah moved from her South Road shop to the one illustrated in the photograph. This had previously been a butcher’s.

She had plate glass windows fitted which provided the customers with a good view of all the wares; especially the children, since she specialised in toys and sweets. She insisted that the shop door remain open throughout opening hours, since this was evidence that the shop wasn’t closed. The door was closed on only one occasion and that was when it was snowing so hard that the snow was actually drifting into the shop.

This was no great sacrifice, however, since no one was out shopping! Although the shop had a heating system it was rarely used since Hannah claimed that it steamed up the windows, thus preventing customers from seeing what was displayed there! As a result Hannah rarely felt the cold.

When Hannah started in business cigarettes were bought loose in large collapsible and refillable boxes. She then split them into smaller amounts which were sold by the ounce. Hannah’s shop supplied all the pubs and clubs in the area with cigarettes. She also stocked Blanco and Brasso which were bought by the soldiers of Albermarle Barracks. 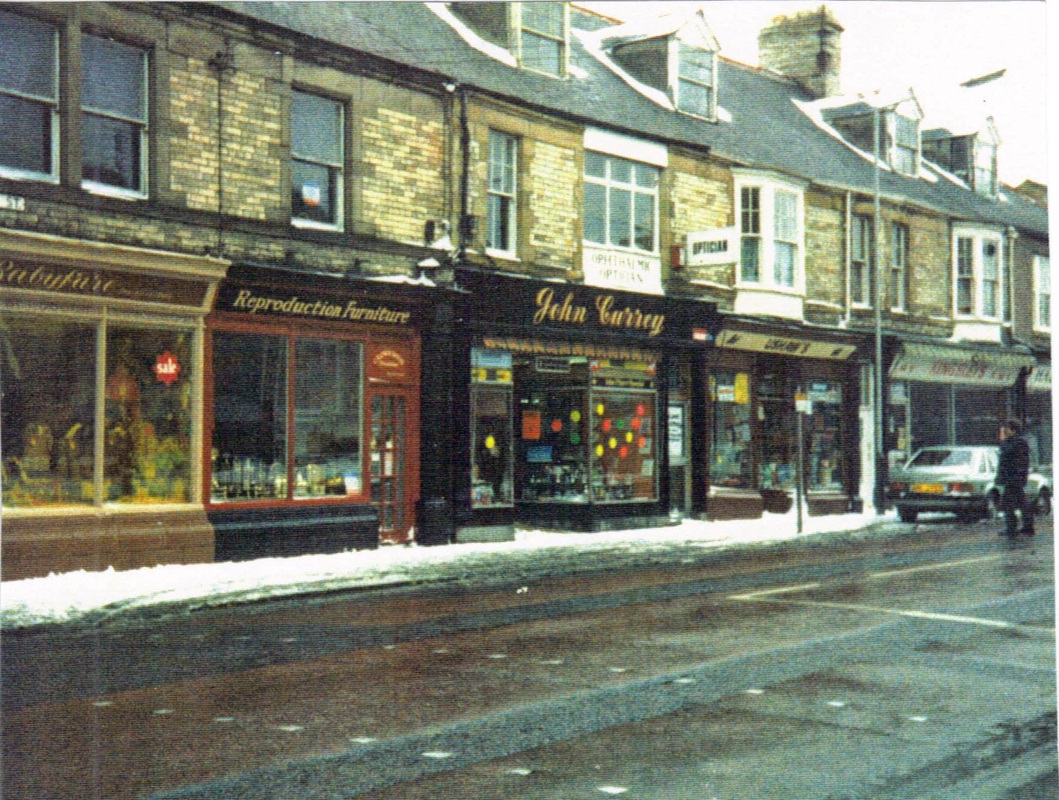 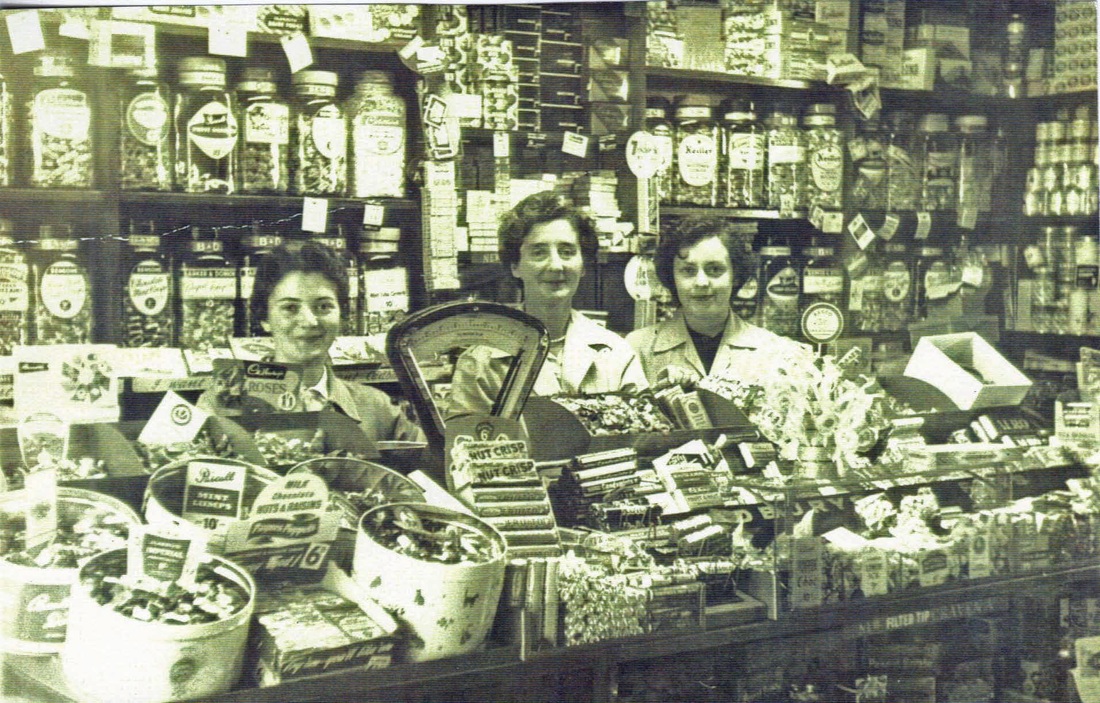 Staff of Currey's shop, Front Street c. 1958
This block once housed Joe Lee's Drapery Shops
Hannah built up a regular trade with Prudhoe Hospital selling them toys and other Christmas gifts. The Hospital was also a major outlet for sweets. Every month she ordered ½ cwt (56 lbs) of a particular type of sweet from Welch’s, the manufacturers, and these all went to the Hospital. The representative of Welch’s was intrigued as to the reason for this substantial order and although Hannah wouldn’t tell him, he eventually discovered the destination of all these sweets and began to deal directly with the Hospital himself. Hannah was incensed and decided upon a plan of action to

cut him out and deal directly with the factory herself. So she hired a van, travelled down to the factory and refused to leave the premises until they had fully loaded it with sweets!

Two colourful characters who frequented Prudhoe Front Street before the Second World War were Macca Bob (also known as Swanky Bob) and Old Mac. Swanky Bob, who lived at West Wylam, was never without his pair of gloves; always wearing one and carrying the other in his hand. Old Mac lived on his own in a cottage behind the Locomotive Inn at the bottom of South Road. One Christmas Hannah Currey instructed one of her shop girls to go out and buy him a shirt as a Christmas gift and take it around to Old Mac’s. Later in the day Hannah noticed that the group of old men who frequented the seat at “Coulson’s corner” opposite her South Road shop were all wearing summer straw hats. On asking where they had all got similar hats, she was informed that her father, John, the bookmaker, had given them. Later in the day Hannah quizzed her’ father on the matter and he told her that Joe Lee had been selling off his old stock so he had bought them and given them to the old men.

Hannah’s reply was, “Have you nothing better to do with your money than to buy straw hats?”  Well”, came the reply, “Old Mac thanked me for the shirt, the one which you had actually bought for him!”

“Coulson’s Comer” and the junction of South Road and Front Street were favourite meeting places for old men and ‘characters’ of the town to meet. On certain days they would congregate outside Swan’s barber shop (to the west of the Post Office) hoping to catch John Currey, who would, often as not, pay for their haircut (the scalp and neck being closely cut with a little ‘toppen’ or fringe, left at the front). Another barber’s was Sowerby’s at ‘Bottom Bank’ (above the Locomotive). At this time the Post Office building was Carrick’s sweet shop.

Hannah and Jim Currey’s father, John, had set up a bookmaker’s business in Prudhoe at a time when bookmaking on public premises was illegal. He employed bookies’ runners who would go around the local pubs and clubs to pick up the bets. It is reported that two of his runners barely left his side in case of trouble. John’s business premises were in an upstairs bedroom of his home at Pendower House, 14 Front Street. For most of the time the police seem to have turned a blind eye to John’s betting business.

John was always interested in sport and it was through this interest that he began his business. He had a stand each year at the Blaydon Races. During the 1926 strike he sponsored and organised a sports day at Hillcrest. Food parcels, donated by local residents, were given as prizes and these would be much appreciated in these difficult months of unemployment. John also sponsored the Ovingham Brass Band and he and a couple of others put up the money to build the Rio Cinema which was regarded as the best in the area.

The Rio was built on the site of Watson’s private dwellings and opened in 1940. Watson also sold land to Prudhoe Council to create Oakfield Park with its bowling green, tennis courts, putting green and pavilion. The bowling green was used free by Prudhoe Veterans bowling club which was formed in 1950. 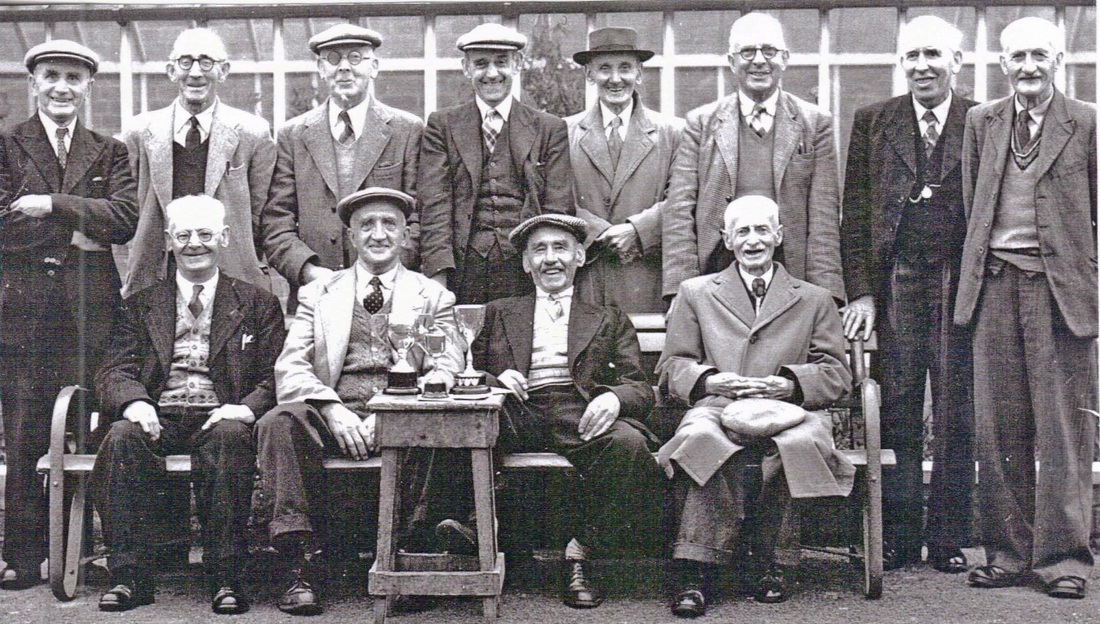 Prudhoe Veterans Bowling Club c. 1950
The Council sold the park to the Co-op in 1987 for its new superstore. A new bowling green and Waterworid swimming pool were provided at the ‘Suey’ - an area where informal football matches used to take place. The name ‘Suey’ is thought to have been given to the pitch because “it was suicide to play there” due to the stony nature of the field and the fact that teams of all ages could number perhaps thirty a side with no stringent rules. Informal games of quoits were also played there.

Jim & Hannah Currey and Ken Hood were said to have started Prudhoe Golf Club which at that time was situated at the ‘Suey’ before its development into a “kick about” area. Jim’s involvement with the Golf Club, however, had an unfortunate end. Each year the Club had a dinner dance in The Palace. Jim was a practical joker and it is said that one year at the dinner, which was held on the balcony at one end of The Palace, someone flicked a spoonful of trifle at one of Jim’s friends. Jim retaliated by tipping a large bowl of the trifle over someone’s head. A fight ensued and tables were thrown over the balcony. As a result Jim was banned from future dinner dances.

Jim Currey followed his father into the bookmaking business and an office was acquired upstairs from a watchmaker’s shop above the building until recently occupied by Windsor Bakery. A ‘speaking tube’ passed from the office to a room below and, having whistled down the tube to attract attention, the speaker put his mouth to one end and the listener put his ear to the other. One day Jim’s young son, John Junior, was encouraged to play a practical joke on the person below. Having whistled down the tube and ascertained that someone had put his ear to the other end, John poured a jug of water down the tube so that the listener got an earful!