Photographs relating to this article, including those in this extract, may be found in Gallery 3.1
During the Second World War a prefabricated building was built behind the Parish Hall. This was a Day Nursery and was built mainly to enable local women with young children to work in the munitions factory.

David Walker went to this nursery when his mother, a widow, had to go out to work in the late 1940’s. The nursery had little beds where all the children lay down for a midday rest. When the children were taken out into Prudhoe for a walk, they were formed into a double crocodile and each child had to hold on to the coat tail of the child in front.

The nursery was converted into the Prudhoe Branch Library at a cost of £3,510, which included the installation of heating and electric lighting. This conversion replaced the library provision in the Parish Hall which had begun in 1948. Before that a library service operated for one hour a week in Prudhoe West School. The prefabricated library whose area was 2,000 square feet began to fall below the expected standard of a library and was stretched to provide a service for the readership which doubled in nearly thirty years.

A new purpose-built library was officially opened by Coun. Mrs E W Mitchell, OBE, the chairman of the County Council, on 14th December 1984. The new library cost £248,000 and had an overall area of some 5,250 square feet. 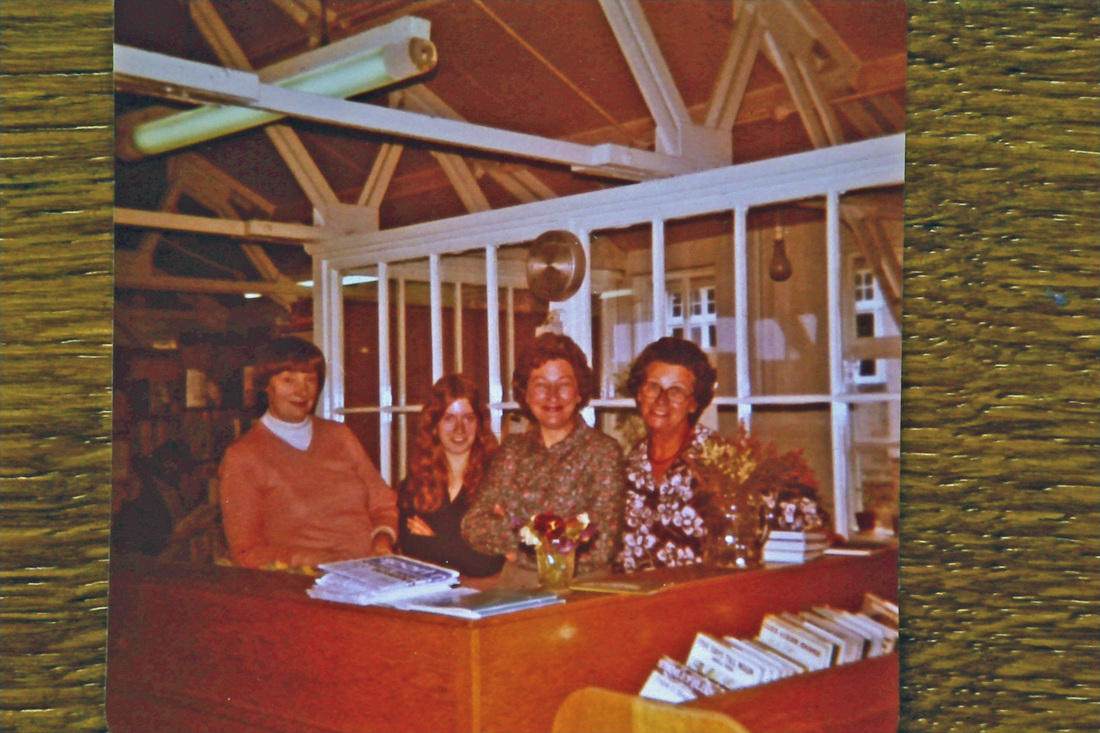 Staff at Prudhoe's old prefabricated library c. 1970
On the left is Margaret Daglish (co-author of Prudhoe in Old Picture Postcards, published in 1985)
As part of the proceedings a time capsule was buried in the foyer, the contents being suggested in a local children’s competition.

The new library was built on the site of St John’s Methodist Church Hall which was demolished for the project. A plaque in the library foyer was a memorial removed from the church and was a tribute to the nine members of the Prudhoe Gleemen who lost their lives in the First World War (the Methodist Church having been the venue of the men’s practices). During the Second World War the hall of the church was used as a National Restaurant where one could buy cheap and nutritious meals.

In 2012, the building was completely rebuilt to form the Spetchells Centre, this incorporating the library and the information point.

For a while, prior to its demolition, the church was used by Walter Willson’s while their premises were being renovated and extended at number 63 Front Street.

A similar fate befell the Wesleyan Church and manse on the north side of the road. The Wesleyan Church had been built in 1871 at a cost of £500. This site is now the Factory Shop but when the store was built it was occupied by Lipton’s, who had taken over the Hadrian self-service store (which had previously occupied the premises now used by the Halifax Building Society). The store then changed to Presto then KwikSave before becoming the Factory Shop.