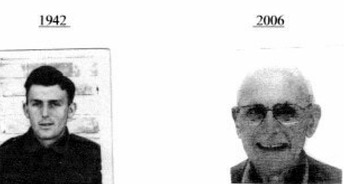 The photo on the left was taken in Italy and paid for with camp money
9. Reminiscences of Bernard Stewart

Bernard was born in February 1926, at West Wylam, where he lived for the first thirteen years of his life at 37 Clive Street, one of the old stone rows of miners’ cottages.  He was the son of Edward and Jane Stewart.  His father was a miner for the whole of his working life.  Bernard was the second of three sons.  His brother John was born in 1923, and Edward in 1927.  Their sister Theresa sadly died at birth in 1930, and was buried in the Roman Catholic cemetery on Moor Road.  She weighed 14 lbs, and her mother never recovered from terrible ulcers in her legs, caused by the stress of the natural birth.

The family home was very basic, with one room downstairs, where jobs like cooking and ironing took place, and two upstairs bedrooms.  None of the houses had any plumbing, and water for cooking, washing and bathing was supplied by a standpipe in the street.  Hot water for drinks or cooking would be boiled in a kettle on the kitchen fire.  Cold water was poured into a tank - the boiler - built into the kitchen range, beside the fire, where it would be heated up for washing and bathing.  The children bathed on two nights per week, in the tin bath which, when not in use, hung on the outside wall of the house.  They all used the same bath water, one after the other, from eldest to youngest.  Adults bathed separately.  The bath was then carried outside, to be emptied into a drain in the street.  The fire burned continuously, night and day, so that there was always a supply of heated water in the boiler. Hands and faces were washed in a wash bowl.  Hot water was lifted from the boiler into the bowl, using an enamelled jug known as a “lifter,” and the bowl was then taken to the kitchen table.

Monday was “wash day,” when laundry was washed in a big wooden barrel - the poss-tub.  The washing was agitated by hand, using a wooden poss-stick.  A big bar of soap was rubbed into the laundry to produce suds for washing.  A mangle was then clamped onto the side of the tub, and the laundry was wrung through it, so that the dirty water fell into a bucket.  This dirty water was carried out of the yard and tipped into the street drain.  The bucket was then filled with clean water from the standpipe, and this water was emptied into the poss-tub, where the process was repeated until the laundry was rinsed.  The items were then wrung through the mangle several times until they were dry enough to be hung on the line.  Each house had its own washing line, which stretched from one side of the street to the other.

Other days of the week were also designated for different activities.  Sunday, for example, was chimney cleaning day, when old newspapers were lit in the fireplace.  As a result the street would then be filled with soot and particulates.  Friday was baking day, with a wonderful smell of home-cooked bread, teacakes, stotties, scones, cakes and pies.  These were then stored for use throughout the rest of the week.

Toilets were earth closets, known as “netties,” and they were on the other side of the street to the houses.  Old newspaper was used as toilet paper.  On collection day a cart, pulled by a Clydesdale horse, came to collect the contents, which were mixed with ashes and shovelled by the “honeydippers” onto the cart.  The waste was then carted to a tip along Johnny Bell’s Lonnen  (Broomhouse Road).  The man in charge of the cart was “Tottie” Givens.

Bernard and his brothers attended St Matthew’s Roman Catholic School for their entire school lives, leaving at the age of 14 years.  As pupils, they enjoyed playing football for the school team, competing on the West Wylam pitch against such teams as Eltringham, Mickley and West Wylam.

He remembers when the “New Road” (Station Road) was built, linking Front Street with Prudhoe Station in the 1930s.

In 1939, the family moved house to 110 Castle Road, on the Castle Dene estate.  Compared to their old house, this one was quite modern - it even had plumbing and an indoor toilet!  Again, there was one room downstairs, which served as the family kitchen.  The whole family shared the one bedroom, which was divided by a screen to give the parents some privacy.  They lived there all through the Second World War.
Bernard recalls “the big freeze” at some time during the war years.  There was ice a foot thick on the Tyne from Ovingham Bridge to Wylam.  When the ice cracked at Low Prudhoe, the noise it made could be heard at the top of the hill in Prudhoe village.

He also used to frequent the Rex Cinema, known then as “The Electric,” and situated on the site now occupied by Red Brick House nursing home.

He remembers when three German bombs were dropped over the Tyne valley, presumably with the intention of hitting the Vickers Armstrong munitions factory at Scotswood.  One of the bombs landed and exploded near Ovingham’s Whittle Dene Wood.  Bernard and his brothers ran down to the site, and collected shrapnel.  Bernard stored his in a metal box, and in his later years he would show the contents of the box to his children, who were very impressed.

When Bernard left school at the age of fourteen, he began work as an apprentice mechanic at Fewster’s Garage, working on many different types of vehicle.  Jimmy Fewster lived at Homedale in Prudhoe at the time.  Jimmy had a garage on West Road in Prudhoe, but Bernard was based in the new Stocksfield branch, on the site now occupied by Ford Rise.  On his very first day of work, he was given an urgent job to do for Mrs Fewster.  She had a horse which badly needed to be shod, and Bernard had to walk it all the way to the blacksmith’s shop at Crawcrook, then all the way home again.  He was tempted to mount the horse for the journey home, but there was no saddle, so he resisted.

Bernard’s apprenticeship lasted throughout the War.  His work included visiting outlying farms and houses to repair vehicles.  During this time, signposts were covered so that any invaders would not be able to find their way from place to place.  He recalls one occasion when he was sent on an errand.  Because the signs were covered, he lost his way and had to use the sun to eventually find his way back.  Another time, he was working on a “digger” at Hedley drift mine.  He saw some miners on their backs, attempting to shovel coal from below, and he helped them by pushing the coal into the open air with his digger (bull dozer), so that they could get at it more easily .  The men were very grateful!

He also remembers a new house being built next to the Stocksfield garage.  It was built for Jimmy Fewster who was moving there with his wife and son from their home in Prudhoe.  That red-brick house still stands on the corner opposite the Baptist Church.

He recalls when Prudhoe East School was known locally as Falconer’s School.  Mr Falconer was the headmaster at the time.  To the east of Falconers was a row of stone houses called “The Terrace,” which occupied the site between the West Wylam Inn and the Miners’ Hall (currently Kingdom Hall).

Prudhoe was not unaffected by World War 2.  Bernard remembers a German airship - a “cigar” - flying over Prudhoe, although he was not scared by it.  He also recalls the whistling of bombs, followed by big bangs.  All houses had to use black-out curtains, and the “black-out man” would bang on the window if he could see any light escaping.  Bernard was standing, one day, at the crossroads at the top of the “new road,” after going to the pictures at the brand new Rio cinema, when someone told him that a bomb had been dropped on Ovingham (?).

During the war, Bernard’s older brother John served on a submarine, mainly in the Indian Ocean.   He told the story of how he was entering Trinkomalee harbour in Ceylon (now Sri Lanka), when he heard a voice calling out from a ship leaving port, “IS THAT JOHN STEWART?”  John shouted back, “YES!  IS THAT - So and So???(name forgotten)”  The seaman was also from Prudhoe!

One very significant event was the demolition of hundreds of miners’ houses in the 1960s, and their replacement by an impressive new council estate at West Wylam.  This work was commissioned by Prudhoe Urban District Council in its efforts to replace quite primitive miners’ homes - in West Wylam and Mickley Square - with superior modern dwellings.

On 2nd October 1954 Bernard married Bernadette (Bernie) Ranaghan, who had moved to Prudhoe from West Boldon at the age of 14 years, after her mother had died from a brain tumour in her 30s.  She and her father and sisters had moved into Durham Riding Cottage on Moor Road, to live with her father’s spinster cousins, Katie and Agnes, who were both school mistresses.  On moving to Prudhoe, Bernie briefly attended St Matthew’s R.C. School, and was involved in the various activities of Our Lady and St Cuthbert’s Church, which Bernard had also attended.  After only a few weeks at St Matthew’s, Bernie and her sisters were transferred to the nearest Catholic grammar school, the Sacred Heart Girls’ School in Fenham, Newcastle.  The dangers of war resulted in all the pupils being evacuated, and Bernie was sent to a castle in Kendal, where she lived for a few happy years.  Her sisters were also evacuated to various destinations, mainly in Scotland.  After the War, when she matriculated, Bernie became a drawing office worker for the electricity board in Newcastle.

Her marriage to Bernard produced five children - three boys and two girls.  They were Nicholas 1958, Mary 1959, Peter 1961, Martin 1962 and Kathleen 1964. The family’s first home was a prefab, number 2 Castle Close.  Then in 1960, they moved into the house where Bernard still lives today, Beechwood House on River View.  The house was bought from ex coalminer, George Muir, for £1,250 using a mortgage from the Co-op.
The children grew up and started working.  Nick and Peter are now both involved in the lumber tree felling industry, Martin works in landscaping and as a professional groundsman, Mary is a mental health nursing assistant, and Kathleen is now a fitness trainer - following earlier work as a civil servant.  Mary worked at Prudhoe Hospital for a while.  The hospital had been developed on the site of Prudhoe Hall, the impressive home of the Liddell family, who were local mine owners.  She remembers being told by her mother about the “Hall boys and girls,” who would be walked, in a chain, from the hospital to Prudhoe and back for Sunday walks.
​
Sadly, Bernie passed away in 2012.  She and Bernard had been married for fifty-eight years, and Bernard was devastated.  He felt lost and lonely.  But he bravely carries on, and continues to live in the family home with the support of his caring family.  Even though many years have passed since he retired, he is still visited occasionally by Jimmy Fewster’s only son, and he appreciates this friendship.

The interview digital record is of poor technical quality and has not been reproduced here.