Photographs relating to this article, including those in this extract, may be found in Gallery 4.2.2
Eltringham School opened on 1st June 1886 to cater for the hamlet which had grown up around the Eltringham Colliery. For a while the village was known as New Eltringham to differentiate it from the old small settlement of Eltringham which was on the east side of Station Bank at Mickley as one drops down towards Mickley Junction.

It took some time for the school to attain the numbers for which it was built. Gilbert Howell, the first headmaster, recorded that on the first day only 24 scholars turned up, but states that it was probably due to the wretched weather that the attendance was so poor. By the end of the week 32 children were on the books and this grew to 54 in the second week, though a fair proportion of these came from the “Prudhoe parish” rather than from Eltringham itself. The main bulk of Eltringham children, for whom the school had been built, had not put in an appearance. Mr Phillipson, the Attendance Officer, was therefore asked to complete a census of the village. He found that over a hundred children were eligible for school of whom about twenty said that they went to other schools. The school roll, however, was still only 71. Mr Howell reported that many children had not been to any school at all and several eight-year olds didn’t know the alphabet. He was assisted by a boy called Turner from Ovingham who “had not yet passed Sixth Standard” plus a Miss Futers.

The fees for attending the school was 2d per week for a child under 5 years of age, rising by a penny each age group up to the age of seven, when 4d per week was charged. The third child in any family was admitted free. By January 1887 several families were in arrears with their school fees since men hadn’t worked for 12 to 14 weeks and in January 1888 two children were withdrawn from the school owing to the inability to pay. These children, it is recorded, went to the Catholic School!

At this time Eltringham seems to have had a very transient population. There are several references in the school logbook to families moving from the village. By June 1888 sixty seven children had been admitted but forty had left during the year. The workmen appear to have gone to work in other collieries such as Walbottle, South Shields and to the South Wales coalfield.

The school began to expand, however, and in September 1892 the Managers advertised for a “female ex-pupil teacher” offering a salary of £35 per annum. There were no applications, so the post was re-advertised at £40 per annum. It appears that no one was appointed until the end of October when a Miss Jean Mackenzie joined the staff. After the Christmas break she did not appear on the first day of term, nor had she been granted leave of absence. The reason for her non-appearance, however, was due to the fact that her home was in Aberdeen and a storm prevented the steamer, on which she was to travel, leaving port.

Schools at the end of the 19th and beginning of the 20th century relied heavily on monitors and monitresses to supplement the sparse teaching staff. Following a five year apprenticeship in this capacity, they could, if satisfactory, be upgraded to ‘pupil teachers’ when after a further four years they could become non-certificated teachers. Pupil teachers were not allowed to serve in school for more than twenty hours a week.

The head teacher was responsible for the further education of his pupil teachers. Mr Howell gave lessons to them after school on Mondays, Tuesdays and Thursdays from 5.20 to 6.30pm and on Fridays from 4.20 to 5.30pm.

By 1902 the school was experiencing overcrowding. There were now 212 pupils. Mr J Harris (appointed in 1890) was now the head teacher and he was assisted by Edith Elliott as assistant teacher, A L Cutty and S E Potts (ex Pupil Teachers) and Mary Turner who was in her final year as a Pupil Teacher. The school’s accommodation was 200. Overcrowding is still recorded in 1924 when the seating accommodation was stated as being 149!

Measures against this overcrowding were taken in 1925 when a wooden hut was added so that the children could be divided into five classes. A further hut was added in the schoolyard in 1927 and the yard was levelled and asphalt put down. Several accidents had been recorded over the years to both pupils and teachers owing to the unevenness and sloping nature of the yard.

Truancy perhaps relieved the pressure of overcrowding in the early part of the century. The usual excuses were given for non-attendance, but it is interesting to note that in 1890 a comment is made that attendances were poor every other Wednesday morning since “many of the children go to the shops at Prudhoe” and on Friday afternoons the attendance could drop to as little as 57%. The School Board, however, took measures against parents whose children had poor attendance. Parents were summoned to a meeting and cautioned. In 1893 two parents failed to attend such a meeting in April and received notice that, if their children didn’t attend regularly, they would be prosecuted.

Infectious diseases also had frequently affected the school’s attendance. On 14th January 1889 only 59 children had turned up due to measles in the village (the attendance was usually about 108). The headmaster waited for half an hour “to see if the attendance would be augmented, without any difference”. He then dismissed the children and closed the school for a week. Following this, two boys were absent for “several months on account of the complaint”.

Infectious diseases seem to have been almost an annual epidemic. In 1895 the Medical Officer closed the school for a month on account of measles - over eighty children being infected. In 1897 the Rural Sanitary Authority closed the school from 25th November to 10th January owing to an epidemic of scarlet fever, and, in the following year, the school was closed for six weeks by order of the Medical Officer for Hexham Union owing to diphtheria and scarlet fever.

Actually attending school could also have its hazards! On 22nd November 1889, Annie Goodchild, a girl in Standard I was almost burnt to death in school, being completely enveloped in flames. Mr Howell, the head teacher, writes “it was with the greatest difficulty that I succeeded in beating out the flames, being severely burnt myself in my efforts. The affair was purely accidental, she having caught the fire (in the classroom) with her garments whilst going out to play”.

The privations caused by strikes in the coal trade caused considerable hardships for families and the schools made great efforts to help to ameliorate the effects on the children. For the pupils of Eltringham free meals were provided in 1921 from late April until the end of July. Breakfasts were provided in school but, as no facility was available for cooking, the children had to walk to Mickley for their dinners. 75 children took advantage of breakfast at 8.30am and ninety received dinners. A similar situation arose at the beginning of 1926. Dinners were again provided at Mickley. About 30% of the children availed themselves of breakfasts and 40% had dinners. The numbers began to fall off by early October but the coal strike wasn’t settled until the end of November and feeding of children continued for a few more weeks after this. Yet again in 1928 breakfasts were provided for eleven children in need, and this extended from September to April 1929.

During the 1926 strike, voluntary shoemakers at Eltringham began to repair children’s boots and new boots were ordered for ten children from a fund organised by the Labour Party and 41 pairs of boots were repaired and 6 pairs of clogs given to the most deserving cases from money provided by the National Union of Teachers.

In 1928 a general excuse for non-attendance at school was cited as “bad boots”. The Health Visitor provided a list of 25 names of children in urgent need of boots and applications were sent to the “Boot and Clothing Fund”.

In spite of the low level of income, parents at Eltringham School in 1902 were expected to pay for their children’s reading books, arithmetical text books, recitation books, copybooks, exercise books for arithmetic, dictation and composition, and compasses. In a number of cases, the children had to go without. The school inspector reported that “this creates a serious difficulty. Moreover, much of the

master’s time is taken up and his usefulness as a teacher is diminished by the necessity for selling books; and he has also to put up with considerable pecuniary loss when children who have taken books on credit do not pay”.

The inspector asked the School Board for an explanation for this situation, since he pointed out that the School Board was responsible for the provision of “all needful books and apparatus  and the School Board, not the teacher, must be responsible for expenses incurred on account of cleaning, firing (presumably the heating of the school) and the purchase of books and apparatus and that all monies must pass through the hands of the Treasurer”. The headmaster then prepared a requisition for books amounting to £40 for the treasurer, who was of the opinion that this cost should be met by the County Education Committee. After considerable correspondence over the amount claimed, the headmaster declared that the amount offered by the Education Committee would barely cover the cost of readers and that, after this expenditure, there was not enough to provide class registers. He declared that “the only thing I see to do is to buy those myself, otherwise I shall have no registers for this week”. This seemed to have hit a soft spot, since the accurate keeping of attendance details was of the highest priority at this time. As a result the school was granted the sum of30.

The school made the most of special days deviating from the usual curriculum. Empire Day used to be highly regarded and the type of celebration is exemplified by that of 25th May 1916 when “at 11.00am short interesting lessons were given to all classes on ‘the meaning and object of Empire Day’, ‘British Citizenship’, and ‘the Growth of the Empire”. In the afternoon immediately after drill, the Union Jack was hoisted. The boys marched in front and saluted it, and the girls joined in singing ‘Rule Britannia’ and the National Anthem. The children then marched into school, and while the girls were sewing, the boys drew and painted the Union Jack. 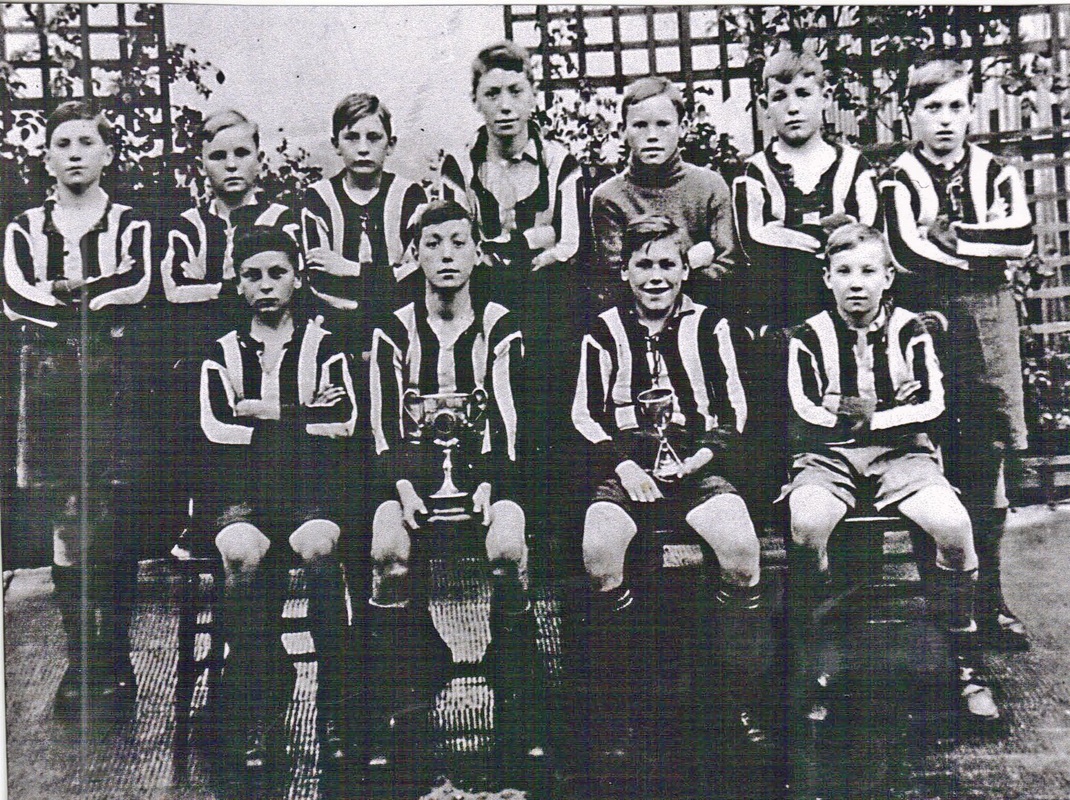 Eltringham (Station Gate) school football team 1937
Contribution to the war effort was obviously considered to be important. During the First World War the school introduced its school garden, and in the Autumn, excursions were made to gather blackberries. On 9th  September 1917 the First Class spent all day “gathering nine stones for the army and navy”. A week later the older scholars had two half day excursions to Bywell. As a result, the amount collected by the school was the incredible total of 24 stones.

In the Second World War the senior boys must have enjoyed their firefighting drill, carrying out practice with stirrup pumps in the schoolyard. The school had four air raid shelters built below the Infants’ classroom and the wooden huts. Each shelter could accommodate fifty children.

Class from Eltringham Primary School 1952
The teacher is Miss Dorothy Boiston (now Mrs Dorothy Brown, former Secretary of Prudhoe & District Local History Society)
Eltringham School closed in July 1973 when new premises were ready on Castle Road. Mr George Watling was headmaster at the time and pupils transferred to the new school, named Prudhoe North Primary School. With the advent of the three tier re-organisation of the education service in the county in 1976, the school became a First School and was renamed Prudhoe Castle First School with Mr Nigel Bush as its first head teacher.