Photographs relating to this article, including those in this extract, may be found in Gallery 8.1
This is one of Prudhoe’s oldest charitable institutions. “The Treat” appears to have started in 1906 when a group of miners’ wives got together and decided that, after a lifetime of hard work, their elderly relatives and friends, and the women who supported them throughout the years, deserved a special treat, particularly at Christmas time.

The early documents have been lost or mislaid, but from a surviving cashbook from 1930 and minute books of the post-World War II period, a picture is obtained of a society which was genuinely concerned about the area’s elderly residents. Companies, organisations and individuals contributed cash and goods to ensure that a special treat was available each year.

Typical individual subscriptions ranged from one shilling or half a crown (2s-6d) to five shillings. The total raised for “the Treat” that year was £122.12s.7d.

“The Treat” consisted of a slap-up tea, a prize draw, a concert party and, of course, the opportunity for a good old gossip. Transport was provided for some of the elderly folk and the expenses included the following: grocery parcels at 1s.9d each (66 from the Meadow Dairy, 121 from the Blaydon Co-op, 120 from the West Wylam & Prudhoe Co-op, 66 from the London & Newcastle Tea Company and 68 from Walter Willson’s). In that year 453 teas were obtained from the West Wylam and Prudhoe Co-op at a total cost of £28.6s.3d. In addition, Walter Willsons also provided 450 bananas, 450 three ounce packets of sweets, 3lbs of tobacco and a cask of apples.

During the Second World War the Treat was discontinued. An Annual General Meeting, however, was held on 16th August 1945 but only eight members attended. Possibly the advent of the concept of the Welfare State made Treats appear to be unnecessary, though contributions continued to come in from the West Wylam Miners’ Levy at the rate of £8.10s.0d per week. This was at the time being donated to the Welcome Home Fund, but when this terminated, the Treat Committee requested that the Levy revert to them.

In 1951, the Treats started again, together with the ever present need for fundraising, which was also required as well as the donations from organisations and individuals. The driving force behind the Treat’s revival seems to have been a committee formed by, amongst others, Messrs J Currey, J Hudspith, J Peel, J Henderson, Fletcher, Ridley, Tyson and Crowe. A yearly census of the residents eligible to be invited to the Treat was organised by dividing the town into areas, with a committee member responsible for each area. The census revealed that 528 persons were eligible and the Prudhoe’s Working Men’s Club was booked as the venue.

The 1960’s produced a very active committee which included Messrs J Peel, W Nesbitt, A Turnbull, Douthwaite, Shilling, J Ward, Campbell, Garlick, Lee, Prockter, Carr, Stokoe & Franklin. The ladies also played an active part, the representatives for the ‘areas’ are listed as Mesdames A Robinson, M Blackburn, A Tumbull, M Elliott, Grundy, Hirst, Davidson and Blandy. However, by the middle 1960’s the number of active committee members had fallen to just five but new help was obtained and the names of Robson, Coulson, Bateman, McBride, Grange, Wanless, Weatherspoon, Outerside, Henderson and Nicholson appear in the Minutes.

By 1969, with the number of guests approaching 800, the Treat was getting too big for the current arrangements. (Previously they had managed to accommodate the Treat with three sittings on one day). The solution was to spread the event over two days. By 1975 the numbers had increased to the extent that the Treat was held over three days. At this time, Phoebe Grange, a very much respected and long serving Prudhoe Councillor, was a very active committee member.

In later years the active committee had declined to just two! Maureen Goodfellow and Joan Younger managed to keep the Treat going by doing almost all the fundraising and organisation themselves, with fundraising for the next year beginning as soon as the previous one has been held. In 1998 over nine hundred senior citizens attended the Treat at an average cost of around £10 per head, with the event being held over a three day period, still in Prudhoe’s Working Men’s Club. On each day, the guests sit down to a slap-up tea, prizes are presented, entertainment is provided and there is still ample time to have a good old gossip and reminisce on “the good old days”. 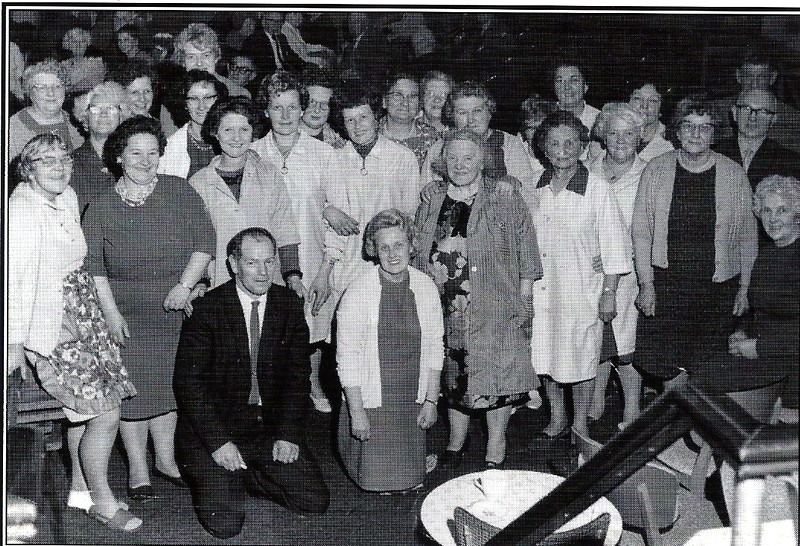