Photographs relating to this article, including those in this extract, may be found in Galleries 1.2.2 and 3.7
The Prudhoe map of 1859 shows the locations of nine wells which were in general use at that time. Note that the road from the Castle is the “Old Road” which passes St Mary Magdalene Church and the Kep Well. The “new road”, Station Bank, was not built until the early 1930’s. Also note the absence of buildings on the road running east-west, which is now Prudhoe Front Street and the West Road. Prudhoe was a‘north-south’ town.

The main forms of transport and haulage would be horsedrawn. The wells were strategically placed to provide suitable refreshment for the horses, as they laboured uphill with their loads. The wells were also used by farm animals as the farmer drove his cows and sheep from field to field, or when moving them through the town.

The wells were also used by the townsfolk. They were the main supply of water for the households, which had to be “fetched” or carried in buckets or other containers, into the homes, on a daily basis. This task was usually left to the women, or the children when they were old enough and strong enough. Piped water supply was a rarity in those days.

View looking down South Road
The lady is carrying yoke and buckets, probably of water, which she may have filled from Aaron's Well further down the bank
It seems that the naming of the wells just ‘happened’. Swalwell’s Well happened to be at the bottom of the field owned by the Swalwell family. The Kep Well never ran dry; even in the driest times it always kept its water! The South Well was the one at he south end of the town. Presumably Aaron’s Well was named after the person, or family who lived next to it. The full sized map shows a stream flowing from Moor Road, down South Road and into Aaron’s Well. From there it flowed down the west side of the road, all the way to the pond at the Castle, via the Kep Well. It is reported that there were stepping stones over the stream on South Road, outside the houses, to allow people to get into their homes without getting their feet wet. The Oak Well was located in the Oaklands area of the town. The Edge Well was located at the edge of the town. The Farm Well was located close to Broomhouse Farm. How the Black Well and the Red Well came to be named as such, is still a mystery! And why there should be two within a hundred yards of each other, is equally mysterious.

The only well remaining is the Kep Well. All the others have been covered over and the water, from the springs which fed them, has been channelled away underground. Occasionally, after very heavy rainstorms, the spring which fed Aaron’s Well and the Kep Well makes its presence known. The water gushes down Moor Road and South Road, then on to the Castle. In recent times, the torrent was sufficiently strong to wash away some of Station Bank and a portion of the Scouts’ Hut. 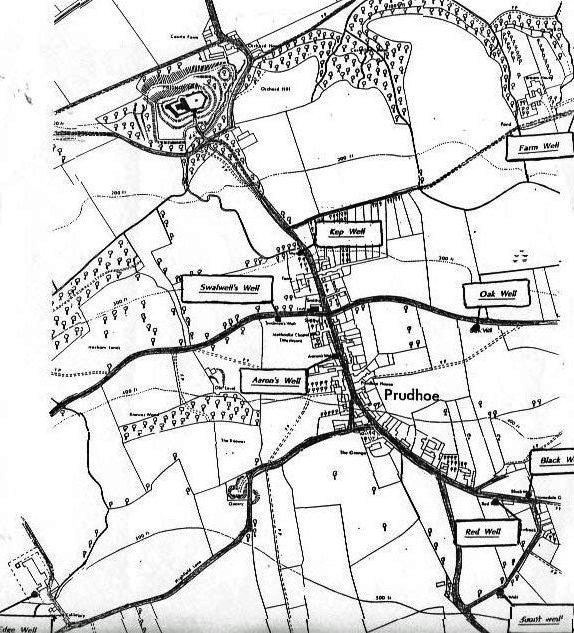 Map of Prudhoe in 1859 showing the sites of the Wells