Photographs relating to this article, including those in this extract, may be found in Galleries 3.5 and 2.1
At a meeting held in Prudhoe’s Employment Exchange, Ethel Batey, then aged sixteen, volunteered to join the Civil Defence (A.R.PJ. She was assigned to the Report Centre, which was housed in the basement of the Parish Hall. There was always someone on duty in the Centre. One night, when she was on duty, the Inspector arranged for a false alarm to be sounded, just to test that the procedures were being followed correctly. It appears that he had been none too happy with their previous efforts!

By and large there was little activity by way of enemy aircraft over Prudhoe but one night the “red alert” light came on, indicating that enemy aircraft were in sight. There was a raid over Newcastle. On another occasion, incendiary bombs were dropped on Hedley Fell and on another Saturday night a German fighter plane flew right up Prudhoe Front Street.

On a fine day the barrage balloons at the bottom of John Dobson Street in Newcastle could be seen from Prudhoe. During the war, Prudhoe escaped lightly. Its first wartime casualty was Ethel’s cousin who fell down the steps at Far Town House in the blackout.

Further accounts of the preparations for war and their effect on school life can be found in the chapter on the East School.

Prudhoe became a garrison town and soldiers were billeted all over the area. The headquarters and officers’ accommodation was at Bradley Hall. Ethel’s father was a dispatch rider in the King’s Own Regiment and slept in the “Big Club”. Two Nissan huts were built next to the Adam & Eve public house at Low Prudhoe and the soldiers were wont to collect their beer from the pub in a white enamel bucket. The soldiers’ NAAFI canteen was where Franco’s Restaurant is now on the Front Street. The site, now known as Hillcrest, was used by military tanks. Ethel Batey can remember one day in 1945 when the brakes of one of these tanks failed and the tank rolled down to Gordon Terrace.

Bevan Boys, who were directed to work in the mines rather than be conscripted into the Armed Forces, were drafted into the area, but mostly to the Ashington & Bedlington deep pits rather than to Prudhoe and District’s drift mines. Incidentally, coal was the last item to be taken off the ration after the war.

Due to food rationing many people tended to make their own bread, cheese and butter. Sugar had to be used sparingly. Rabbit, fish and pigeon were all on the menu - if you could get them! Groceries still tended to be delivered by horse and cart, particularly as petrol was rationed. Ration cards for petrol were issued from the Council Offices on South Road. Some deliverymen made their rounds on foot, carrying large baskets, or on bikes with baskets attached to the front.

Snook, a kind of sea pike, was eaten extensively, fried or boiled, but was not popular. Choice, however, was limited! If you were invited to stay with a friend you always took some of your rations with you, just to help out. Food was scarce, so extra sugar, tea or pieces of bacon would be most welcome. A longer stay necessitated taking your ration book with you.

In autumn, rose hips were collected, particularly by the children. Some schools acted as collection points for them, or else they could be sold to the local chemist. The hips were processed to make rose hip syrup which provided additional vitamins to supplement the war time diet.

Allotments were, of course, a boon, giving a plentiful supply of fresh vegetables and many people would keep hens, rabbits or a pig as additional sources of food. 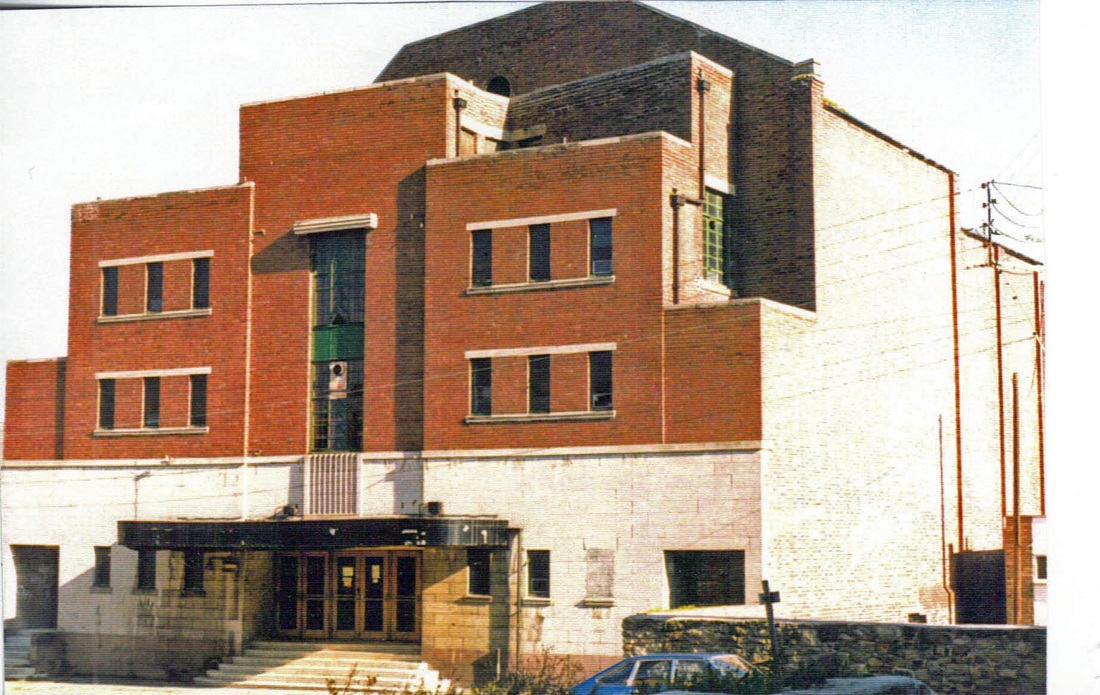 Rio Cinema 1987
Demolished to make way for the Co-op Supermarket
Food parcels were sent from Commonwealth countries to the local schools. These contained such luxuries as chocolate, Horlicks, tinned meats and canned fruit. Certain fruit, which had to be shipped from abroad, such as bananas, had never been seen by children who were born during the war years and when they became available again many a child was puzzled as to how to open a banana!

People entertained themselves in their spare time, going to local dances, inviting troops into their houses and going to the cinema to catch up with the war news on the newsreels. Prudhoe has had three cinemas, the Rio, the Palace and the Electric (later renamed the Rex). They all had two performances a night. The Palace closed in 1925 and the Rio opened in 1940.