Photographs relating to this article, including those in this extract, may be found in Gallery 2.6
The advent of the bicycle with its relatively affordable price provided a means of exploration beyond the bounds of the locality. A cycling club was in existence in Prudhoe at the end of the 19th or beginning of the 20th century as evidenced by the photograph of a group of club members resplendent in their striped blazers and caps. 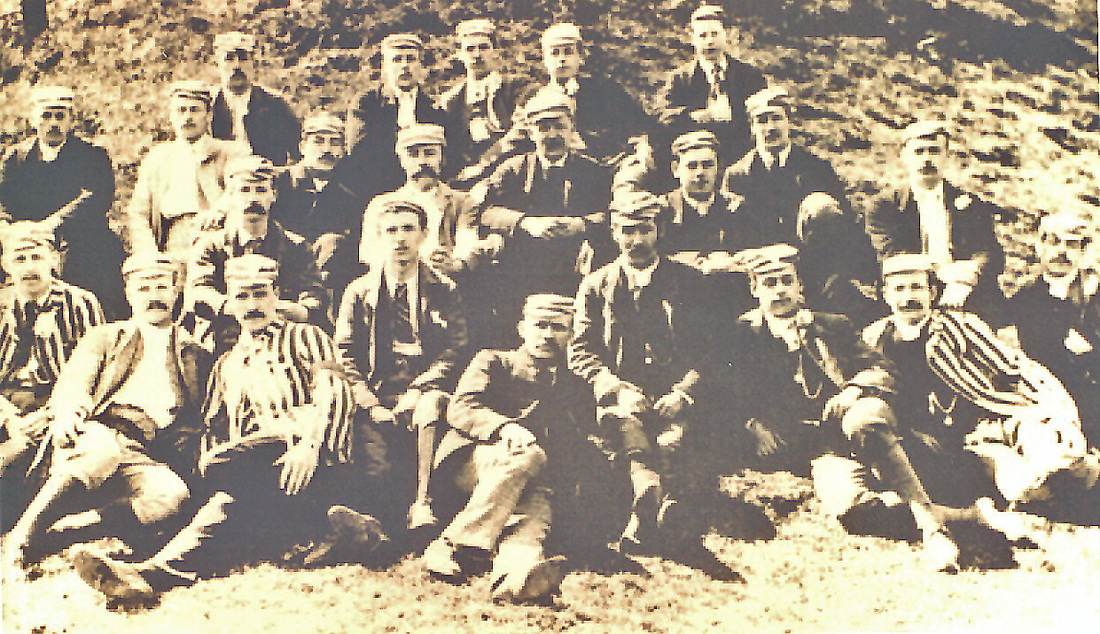 Members of Prudhoe Cycling Touring Club c. 1905
It would appear that there was provision in Prudhoe both for competitive racing cycling (as evidenced by the photograph in which cycling club members are proudly displaying their trophies which they have won) and a more social form of cycling as a means of exploring the countryside.

Cycle touring proved to be very popular in the area until the advent of the Second World War and the subsequent ownership of cars.

Mrs Sally Robinson (née Armstrong) provides us with a good description of the activities of the Prudhoe & District Cycling Club during the early 1930’s when the Club President was Dr McCoull and Mr Coulson was the vice president. Some of the members at that time were Arthur Waite, Frank Elliott, Bill Barker, Albert Allison, Robert Robertson, Tom Thirtle, Bill Rutherford, Hugh Robinson, Harry Withycombe and Albert Webster. She mentions that there were only one or two female members, including herself.

There was little traffic on the roads and members turned out each Sunday morning, meeting at Coulson’s Comer at the Road Ends, no matter what the weather. Waterproof capes would be worn if it was wet or else the sun was relied upon for drying out one’s clothing.

If the cycles had any gears at all they had just three. Sally’s bike was a Raleigh Sports with Sturmey Archer three speed gears, bought from Henderson’s of Blaydon for £4.19s.6d. 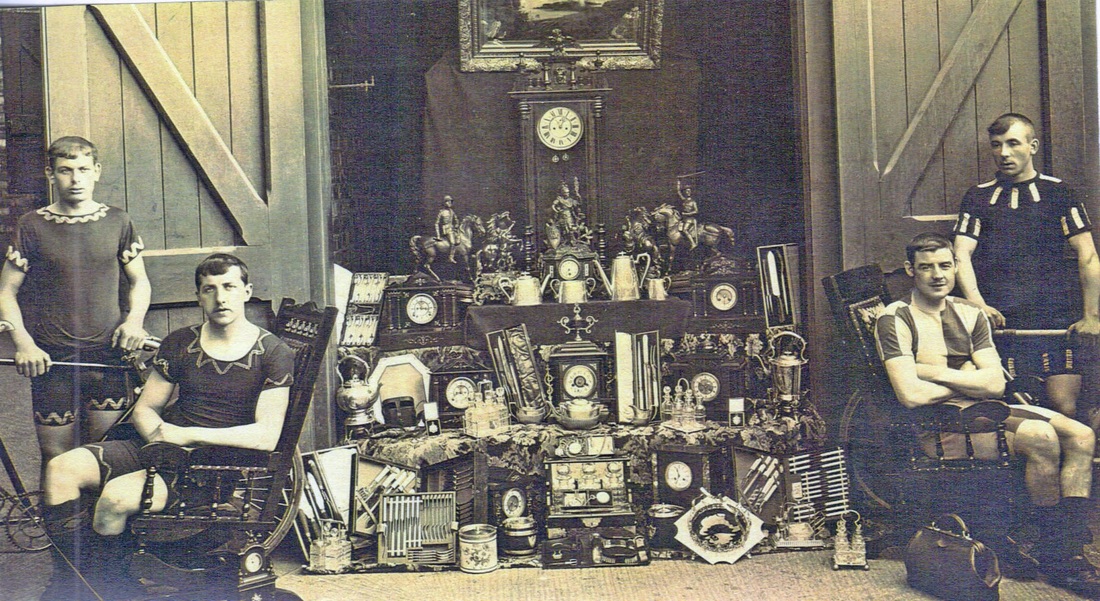 Members of Prudhoe & District Racing Cycling Club with their trophies c. 1910
L to R: J Reed, J Young, W Pattinson, F Pattinson
The season’s routes would be mapped out at the club’s Annual General Meeting. Typical outings would be to Brampton via Haltwhistle, Darlington via Staindrop, Rothbury via Otterbum, Alnwick via Alnmouth, Allenheads via Allendale and Bellingham via Barrasford.

One special event was the “Hundred Mile Tourist Test”. From Prudhoe Road Ends, the route took the members across the Stanhope Moors via Edmundbyers, where a half-hour lunch break would be taken. It continued to Nenthead and Haltwhistle, where a further half-hour break was taken for tea. The homeward route went through Prudhoe itself and on to Stanley Burn and back to Prudhoe Road Ends in order to complete the hundred miles. Sally comments, “It was a very strenuous day, battling against strong winds and heavy downpours. At a special ceremony a medal was presented to each cyclist - a well deserved award!”

Hotels, inns and cafes catered for cyclists on their weekend jaunts and, in some places, signs can still be seen portraying the symbol of the Cycling Touring Club, indicating that clubs were particularly welcome. Sally recalls a particular surprise one Sunday afternoon when, arriving at Shotley Bridge, the club members found a “scrumptious spread” prepared for them, arranged by the Club President.

Even though the roads were quiet cycling was not without its hazards. When travelling from Barrasford to Bellingham and descending the steep slope Sally describes how the wind took both her and her cycle “up into the air, right off the road completely”. She goes on to say, “fortunately I was not wearing my cape, or goodness knows where I would have landed!”