Photographs relating to this article, including those in this extract, may be found in Galleries 1.3, 1.4. 5.2.4 and 9.2
Thompson’s business began in 1948 when Bill Thompson began delivering and spreading lime on farms for which a 60% government grant was given. The availability of the lime at Prudhoe and Billingham ICI plants was the deciding factor in Bill’s move from the Manchester area to Prudhoe. Here he and his wife set up home at 49 West Road, where they were amused by the fact that the house had steps to climb at both the back and front doors.

At that time the lime was hand-shovelled with a number ten shovel and about 250,000 tonnes of lime per year was sold from the Prudhoe works alone. In 1952 Bill and Madge Thompson changed their business from that of a family partnership to that of a limited company called W & M Thompson Ltd. This enabled the firm to trade in hay, straw and grain in addition to the lime business.

By 1952 two lime spreaders were still in use but five salesmen were now employed in the north east buying and selling hay, straw, lime and basic slag. About this time a contract was entered into in County Durham to supply and spread lime on reclaimed opencast sites and also a contract was gained with the Ministry of Agriculture to pick the stones off opencast sites when the soil had been put back. Local men, Ned Scorer, Clem Stephenson and Mick Newton, were taken on as stone pickers together with Bill’s son, Billy. The stone picking contract lasted until 1956 when this avenue of work was exhausted but, at this time, a contract was made with Hylton Paper Mills to supply high quality straw to make high-grade paper.

In the 1960’s, the government changed the subsidy on lime from 60% all year round to 70% only for the months of June to August. These months brought a mad rush by farmers who wished to qualify for that subsidy in such a limited period. The result was that Thompson’s had to look for other aspects of work for the remainder of the year and thus began to sell, deliver and spread basic slag in bulk. Working with basic slag was one of the dirtiest jobs there was. Some said it was even dirtier than pit work, especially if it was windy.

In 1960 the West Wylam and Prudhoe Co-op sold the last of their horses and began to motorise their deliveries, so their fields in Highfield Lane ceased to be of use to them. Bill Thompson bought these fields and built a brick barn and a lean-to which became known as ‘The Ranch’. Here Bill, who had been brought up as a country boy, began buying and selling cattle as a hobby. The Ranch also became a repair shop for the firm’s wagons and lime spreaders.

Thompson’s continued to look for whatever could be hauled with their wagons and started to buy small quantities of road stone out of the quarries where they bought their lime. This was sold to small building sites and farms together with sand and gravel. Following this, the extraction of shale from pit heaps provided an outlet, so a caterpillar tractor with a scraper was bought for £1,100 at a builder’s bankruptcy sale at Seaham. This was the touchstone in the firm’s developing involvement with the construction industry.

In I965 Thompsons bought Woodside House, Fraser’s bus park and Priestclose Filling Station at West Wylam. (This was demolished following the firm’s subsequent move on to the Prudhoe Industrial Estate and is now the site of a small estate of private houses called The Copse but advertised as “The Spinney”). 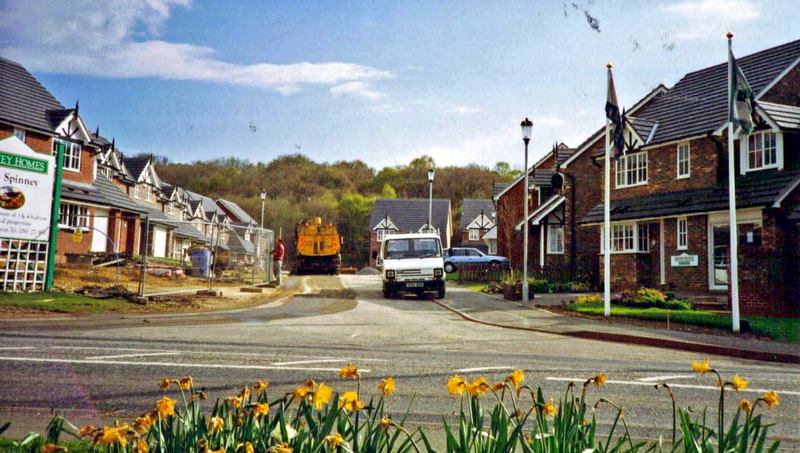 A small Estate advertised as 'The Spinney' being built on the site of Thompson's Garage 1998
The house provided a home for son John, and the garage and bus park supplied the firm with their own area to park a growing fleet of wagons. In 1966-7 a new filling station was erected on the site of the old one with new offices and garage behind it. The garage soon became a Ford retail dealer under Patterson’s Ltd and the firm began to sell and repair cars, The Ford dealership lasted until 1979, by which time Thompson’s main focus was on their wagons, quarrying and demolition work.

With the purchase of their first quarry at Bishop Middleham in 1976, Thompson’s could now knock down buildings, excavate the site and supply the sand, gravel and road stone for new developments. They were now major contractors in this field in the north east with contracts valued up to a million pounds.

In 1987, Thompson’s bought 5 ½ acres at Low Prudhoe and built their new headquarters for all their administration, transport and plant equipment (5.2.4.23). The new offices were officially opened on 30th March 1989 and it was expected that the building would provide for the firm’s needs for the next twenty years. However, such was the expansion of the business that an extension was added in 1997. The site is fronted with well-kept landscaped gardens with a fine water feature and the firm currently employs ? staff. It has four quarries and four landfill sites which are served by a fleet of a hundred lorries. In addition, ? skips are available for hire with ? wagons serving them. The firm’s premises now virtually overlook the chalk heaps at the Spetchells which contributed so much to its growth. 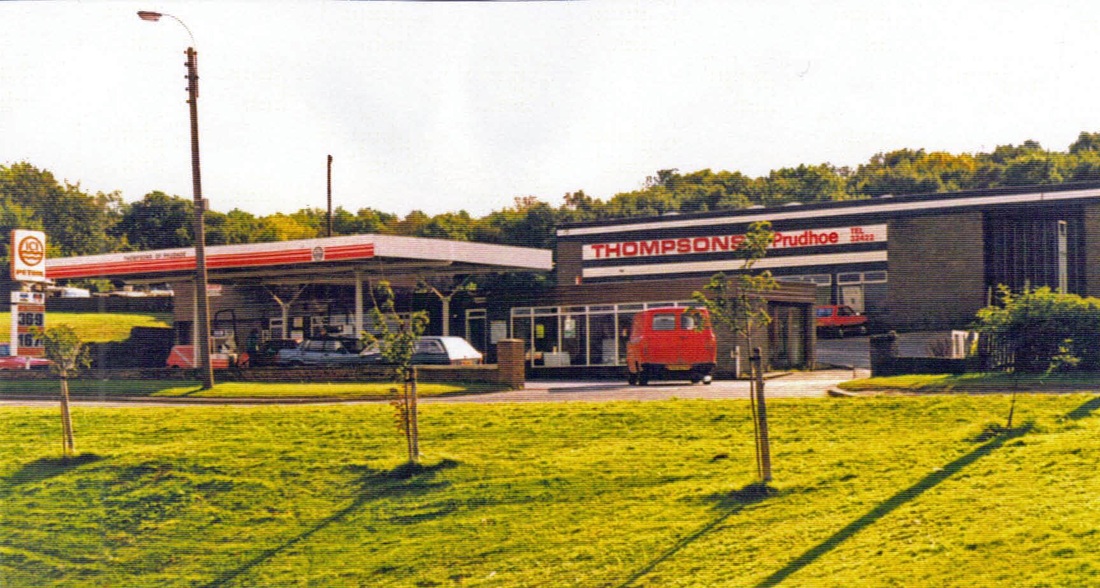