Photographs relating to this article, including those in this extract, may be found in Galleries 7.2 and 7.3
Matthew Liddell was the son of Cuthbert Liddell of Benwell Hall, Newcastle and principal owner of Mickley Colliery. He also opened mines at Hedley, Prudhoe Moor and West Wylam. His social status warranted a residence of some importance so, at a cost of £35,000, he had Prudhoe Hall built as his family home in about 1870.

The Liddell family were staunch Roman Catholics and as there was no Catholic Church in Prudhoe they arranged for a large room in the hall to be used for services. Prior to this, Roman Catholics in the area, who were predominantly Irish immigrants who had come to England during the Irish famine of 1845-7 and had later found employment in the developing pits in the Prudhoe area, had to travel to either Hexham or Stella to attend Mass. This journey would have been on foot: a testimony to the dedication to their faith.

Prudhoe Reading Room on South Road (now the Catholic Club) was erected in 1882 at the sole expense of Mrs Liddell. Bulmer’s Directory of 1886 informs us that it was open on weekday nights and was free to all. The entwined initials of Matthew and Susannah Liddell can be seen engraved on the building. At this time the Blaydon Co-op Society also had a Reading Room and Library above its Prudhoe premises. These were open free to members of the Society and for a small charge to non-members. This facility was open daily, including Sundays, from 10.00am to 10.00pm. The Directory remarks on the fact that “the village is well supplied with libraries and reading rooms, which, it is hoped, may serve as a counterblast to the attraction of the bar parlour”.

Matthew Liddell died on 20th October 1881 and was interred in a vault below the chapel in Prudhoe Hall.

During the 1880’s, however, the chapel in the Hall had become too small for its congregation and Mrs Liddell decided to build a church in the grounds of the Hall to accommodate the worshippers. The church was designed by the architect Archibald Dunn. The foundation stone was laid on 8th December 1889 and the building was opened on 16th July 1891.

Mrs Liddell died on 17th November 1894 and was interred beside her husband in the family vault.

The Hall was inherited by a nephew, John Aiden Liddell, who lived there with his wife, Emily, and six children. (One of their sons, Aidan Liddell, won the Victoria Cross in 1915 and his medals are now in the hands of a private collector).

In 1904, the estate was sold to Colonel Swan (Managing Director of Swan Hunter’s) but John and Emily paid for the Church to be dismantled stone by stone and rebuilt on a site in Highfield Lane. The foundation stone was laid on 23rd July 1904 and it was opened on 5th October 1905. The architect for this work, which included the adjacent presbytery, was Charles Walker and the church was rededicated under the title of the Blessed Virgin Mary Mother of God, and Saint Cuthbert. The bodies of Matthew and Susannah Liddell were transported at dead of night by horse and cart to a vault in the re-sited church.

Church of Our Lady and St Cuthbert at Prudhoe Hall c. 1900
Before it was moved stone by stone to its present site
The last priest to reside at Prudhoe Hall and the first to take up residence in the new presbytery was Fr. Augustine H Simmons (Priest from June 1893 to 1st December 1915).

Prudhoe Hall was served by a stable block, adjacent to the home and the site contained extensive greenhouses, a two storeyed cottage together with Burn House to the southwest. Lodge houses were situated at the eastern entrance on Moor Road and at the west end on the A695 road out of Prudhoe to the west side of the present entrance. These lodges have now been demolished.

Colonel Swan died in 1908 and his descendants sold the Hall and estate consisting of various cottages and 140 acres of grounds for £13,000 to the Poor Law Guardians in 1913 and it became Prudhoe Hall Colony, a home for mental defectives, as it was known in those days.

The outbreak of war in 1914 prevented any extension until between 1919 and 1924 when six units were completed. Between the wars the hospital progressed and in 1939 had 561 patients. In 1948 it came into the National Health Service. Also in that year Monkton Hall at Jarrow was added and the hospital was now called The Prudhoe and Monkton Hospital. In 1955 Earls House Sanatorium in Durham was transferred to the hospital. By 1963 the whole group held 1563 patients. 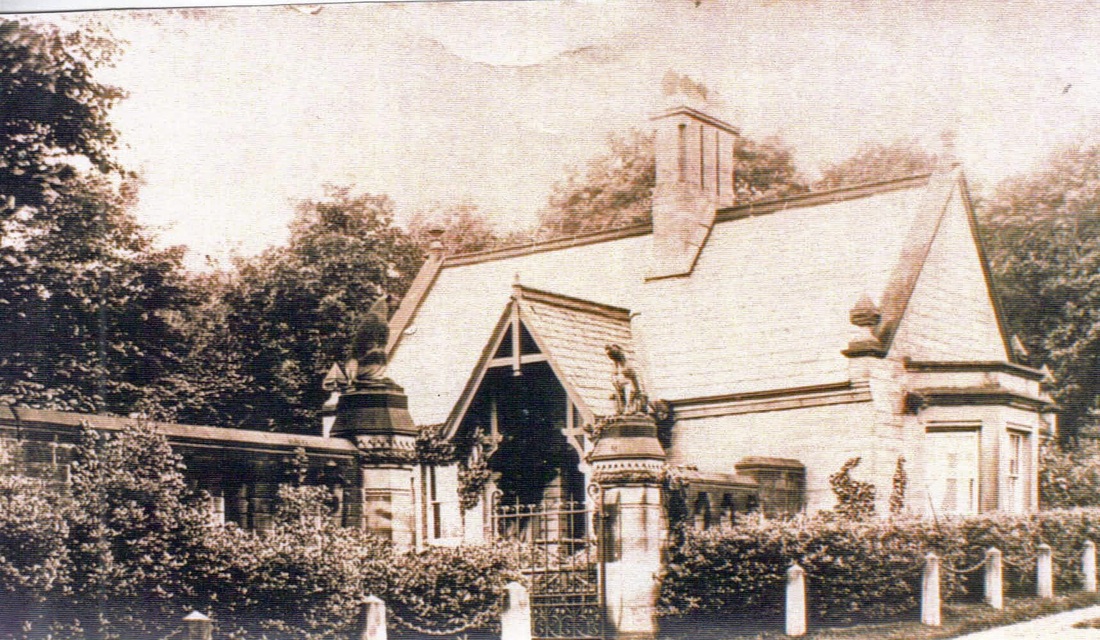 East Lodge of Prudhoe Hall c. 1910
The Ministry of Health provided £1.25 million in 1955 for the expansion of Prudhoe Hospital and much building went on and these were officially opened by the Rt. Hon Enoch Powell, Minister of Health, in September 1963. It was claimed to be the fifth largest hospital of its kind in the country and spread over 60 acres.

The hospital housed fewer patients in 1992 and many of the newer buildings were empty. In accordance with Government policy patients were being moved out of hospital and into the community and in 1994 when the hospital joined with Northgate Hospital, Morpeth and became a Trust, there were approximately 500 patients.

The McCoulls (father and son) were the key figures in the development of the hospital and were physician superintendents from its inception until 1965 when Dr George McCoull retired. In all, three generations of McCoulls were doctors in Prudhoe.

Dr Robert McCoull, the son of the local doctor was born in 1869 and lived at Tyneview, Prudhoe (opposite the ‘Tory’ Club) and it was he who helped to set up what was then known as the Colony for the mentally defective. His son, George, was born at Tyneview in 1899 and took an early interest in medicine, accompanying his father on his rounds and doing some of the dispensing for him. He began his formal medical training at university at the tender age of sixteen.

Having been rejected as a volunteer by the Northumberland Fusiliers in the early years of the First World War, due to the fact that he was under age, he volunteered for the Royal Navy in 1917 and was appointed as a surgeon probationer sublieutenant. Although not yet qualified as a doctor, he was posted as the only medical officer on HMS Swift which was sent to stop the German submarines from getting into the North Sea and, therefore, mounted an assault on the Belgian port of Zeebrugge. Marines were landed and six hundred casualties were recorded in eighty minutes, with 285 men being killed! While on the Swift, George McCoull experienced being hit by a mine, and he was mentioned in dispatches on 17th September 1918.

Following the war he resumed his medical studies and graduated in medicine from Edinburgh in 1922. After a while in general practice he followed his father as a part time medical officer at Prudhoe Hall and became its medical superintendent in 1935.

During the Second World War, Dr McCoull served in the Russian convoys and was on board HMS Ark Royal when it was sunk by a torpedo in 1942. Later on, on Mountbatten’s staff, he was responsible for the health of the airmen in the Indian Ocean sector and, in 1946, he was awarded the OBE (Military) for his work on malaria control.

After the war he continued as a surgeon captain in the volunteer reserve and in 1951 he was appointed an honorary physician to King George VI and, subsequently, to Queen Elizabeth II in 1953.

For his work in developing the treatment at Prudhoe Hall, the McCoull Clinic was named in his honour in 1966 and, under his management, Prudhoe Hospital gained international recognition.

Dr McCoull was the producer of the Hall’s annual pantomime which became a great attraction with busloads of people booking to see it. The pantomime began in 1936 but was disbanded during the war years while Dr McCoull was in the forces. Some idea of its popularity can be gauged by the fact that the 21st Panto in 1965 attracted a total audience of 6894 over its ten day run.

The profits from the pantomime went to the patients’ entertainment fund and in 1967-68, for example, the marvellous sum of £971.5s.11d was raised.

For many years the conductor of the orchestra (which was made up from members of the hospital’s staff) was Mr Porter who also played the cello in the Theatre Royal orchestra in Newcastle.

Dr McCoull died in 1985 at the age of 86. In his obituary in the British Medical Journal it was said that “throughout, he remained a doctor responsible for, and interested in, all aspects of the patients in his care, knowing each one even when the hospital reached its zenith. This was achieved by working a twelve hour day and seven days a week”.

A school was part of the Hospital from its earliest days. A purpose-built school (the Isobel Wilson School) was opened in 1962 and was probably the largest hospital school for the mentally handicapped in England. In 1973, under Mr G Dale as headmaster, the staff consisted of a deputy head teacher, two heads of department, twenty one teachers and two auxiliaries. The Isobel Wilson School closed in 1984. 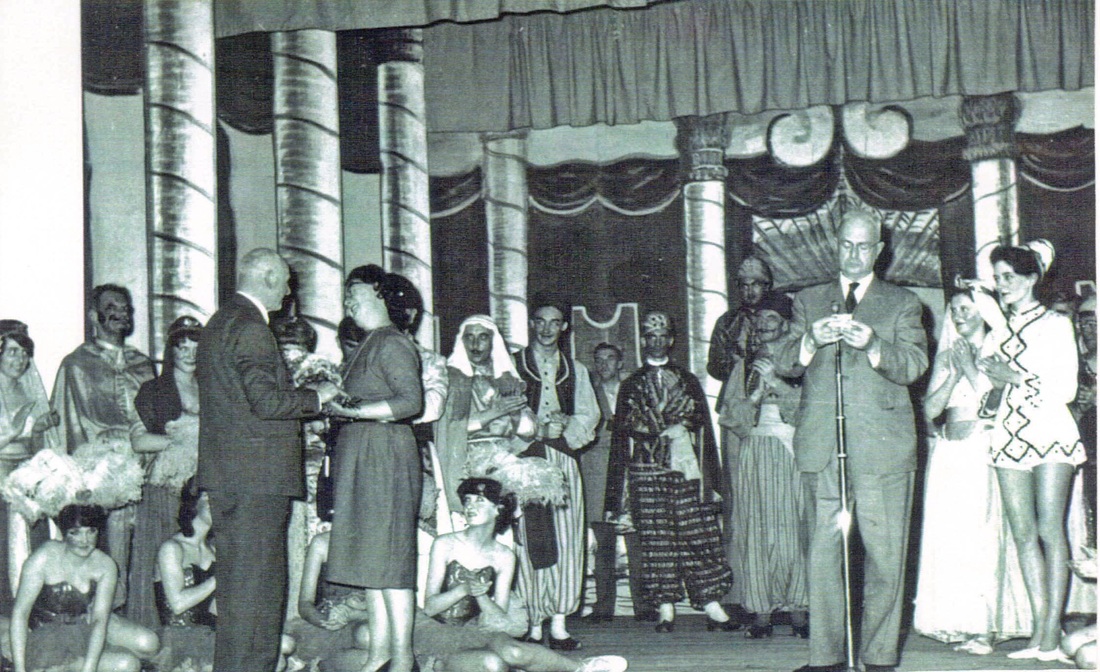 Prudhoe Hospital Pantomime (Ali Baba) c. 1965
Mr Colgan, the chairman of the Hospital Management Committee, presents a bouquet to Sister Lister, the wardrobe mistress. Dr McCoull, the producer, is at the microphone on the right
The Hospital had well equipped craft workshops including a pottery. Pieces marked “Prudhoe Pottery” can still be found locally or picked up at antique fairs. 7.3.1.2a and 7.3.1.2b provide examples.

Just to the east of Prudhoe Hospital stands Priestclose Wood whose name is replicated in Priestclose Cottages and Priestclose Road. This wood is a remnant of a vast forest which once covered the Tyne Valley. The wood is recorded in documents going back to Medieval Times. The name ‘Priestclose’ indicates that the land was once owned by the monks when Prudhoe was in the ancient parish of Ovingham, which was, in turn, administered by the monks of Hexham Abbey.

Master’s Crescent, off Castle Road, is also testament to the fact that part of this area was in the hands of the Master of Ovingham (an Austin Canon and the sub prior of the Abbey of Hexham). Master’s Close near the west end of Castle Dene, going towards Eltringham, was a small farm and hamlet where the Master of Ovingham received the produce resulting from the cultivation of the monastery’s lands. In the 14th century between three and five monks resided at Ovingham. 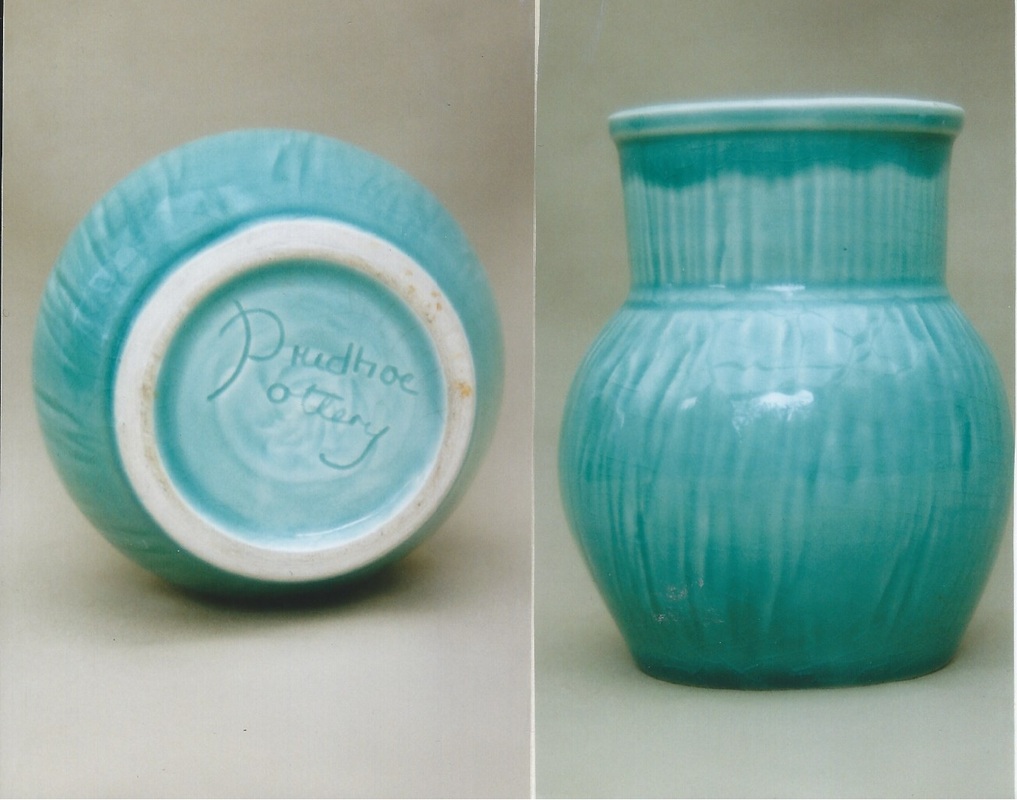 Piece of Prudhoe Pottery made at Prudhoe Hall Hospital c. 1980
The woods of the Tyne Valley provided a valuable resource of timber, fuel and game which would be traded with the local residents.
In the later 18th Century part of this woodland was incorporated into the Prudhoe Hall estate. By 1921 the remainder was transferred to the Mickley Coal Company then to the National Coal Board. In 1973 it was bought from the NCB by Prudhoe Urban District Council.