Photographs relating to this article, including those in this extract, may be found in Gallery 3.1
At the beginning of the 20th Century, when Prudhoe’s population was about five thousand, fire protection was provided by a Volunteer Brigade which used a manual horse drawn pump. By 1910, however, the Local Council became increasingly concerned that the firemen could not be relied upon to turn out at the scene of a fire, let alone attend practices. Consequently in 1912 the Council bought a more powerful appliance and a new Fire Brigade was formed with the Borough surveyor, Mr Burnie, being appointed as its superintendent. At that time a new motor pump appliance would have cost in the region of a thousand pounds, so, instead, the Council bought a re-conditioned “Metropolitan” horse-drawn steamer from Merryweather’s of Greenwich.

This proved to be a great improvement on the old manual appliance which would have taken a large number of men just to work the pumping levers. Each of these men would expect 1s 0d an hour plus free beer! Even the smallest of the steam fire engines was now capable of throwing a far more powerful jet than any manual appliance at a considerable financial saving because of the reduction in manual labour. The cost of operating the new engine was 2s 6d an hour and this included the engineer’s wages, the coal and the oil. The brakesmen would stand on either side of the driver and up to six firemen could be accommodated sitting on the hose box The appliance was pulled by a pair of horses and, over a short distance, a speed of eight miles an hour could be achieved. Nevertheless it was not infrequent for one of the firemen to be thrown off the hose box and injured! The coal bunker would provide sufficient fuel for two hours’ working. 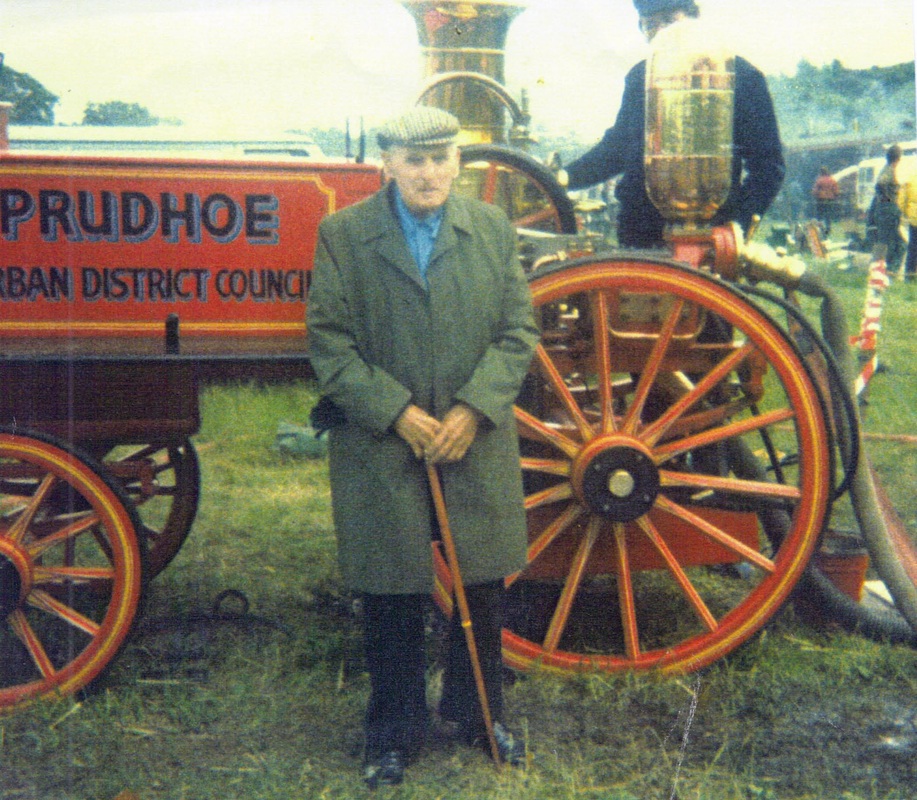 Harry Stokoe, a former Prudhoe Fireman
Standing beside The 'Metropolitan' (Prudhoe's first Fire engine) when it was on display at the Northumbrian Show at Corbridge
Mr R Marsden was Captain of the Brigade at this time and was receiving a yearly retaining fee of £2. The firemen were drawn from local tradesmen and council workmen. These included Mr W T Hunter, the Co-op manager, Mr Willis, the gravedigger, and Messrs J W Lee, T Snowball and T Johnson. The men’s retaining fee was £1 per annum, plus 2s 6d per practice or 3s 6d for the first two hours of attending a fire, with an extra 1s 0d per hour thereafter. The roadmen from the Council were provided with handpumps and acted as Auxiliary Firemen, receiving 2s 6d for the first two hours at a fire, plus an additional 4d per hour after that, providing this took place outside of their usual working hours, otherwise they would only receive their normal wages.

In its early days, the Brigade did not own any horses of its own, and it is recorded that Mr Isaac Murray was paid 7s 6d in 1912 for “horse hire”.
When the fire bell sounded the driver would have to run down to a nearby field to collect the horses from wherever he happened to be working at the time, whilst the other members of the crew would assemble in the Council yard. A fire would have been set ready in the boiler and this would be lit on the way to the scene of the fire. The fire could not be lit too early since it would then have to be stoked while the appliance was moving and, moreover, there was the danger of running out of water in the boiler, since the injector tank only held two gallons. The time taken to build up a working pressure was about eight minutes.

A Ford-Simmons motorised engine was bought in 1932 and the old appliance was pushed to the Council yard. For a while Jack Bright, who was one of the original 1912 Brigade members, and by now the engineman, kept the machine in working order as a reserve pump, but later on it stood derelict in the yard until, at the outbreak of World War II, when the Prudhoe Fire Brigade became part of the National Fire Service, Station Officer T Outerside towed it behind his car to Minsteracres Monastery. Around 1941 seventeen of its boiler pipes were replaced so that it could be worked at the “Holidays at Home” events in Newcastle’s Exhibition Park, but it never again tackled a real fire.

In 1948, the National Fire Service was disbanded and at this time the old “Metropolitan” was given to the Museum of Science and Engineering in Newcastle where it was fully restored - a project which entailed major boiler repairs and re-tubing. The old appliance is still capable of sending a ¼ inch jet of water over the top of a four storey building!