Photographs relating to this article, including those in this extract, may be found in Gallery 1.4.2
It was not until the late 1950’s that the rest of the colliery ‘raas’ at West Wylam were condemned as unfit for human habitation. West Wylam, with nationalisation, had passed from the coal owners to the National Coal Board. It was still, however, in some respects, a private estate since a toll had to be paid by vehicles to enter West Wylam. At its entrance stood a toll house and the last toll collector was Tom Wandless.

West Wylam Toll House c. 1925
The impending demolition of the colliery houses reached the attention of the national and regional daily newspapers. The following is an extract from an article by a Special Correspondent of “The Manchester Guardian”, dated 7th March 1957 - “A penny will buy a visiting motorist admittance to West Wylam - or to what is left of it. But in the last few months business has been poor for Mr Tom Wandless, the toll collector for the National Coal Board. Petrol rationing has taken its own toll for motorists, and those who still use the private road to this mining village now get far less value for their money.”

“Not long ago a penny would buy a tour of the whole village with its long lines of grey stone and rubble houses. Now a penny admits you to only certain streets because the others are no longer there, and the penny of West Wylam is being continually devalued. Soon no motorists will be able to visit Cross Street, Percy Street, Clara Street and some other houses on the list to be demolished. The old order changeth rapidly in West Wylam and it will only be a matter of months before Mr Wandless is out of business”. 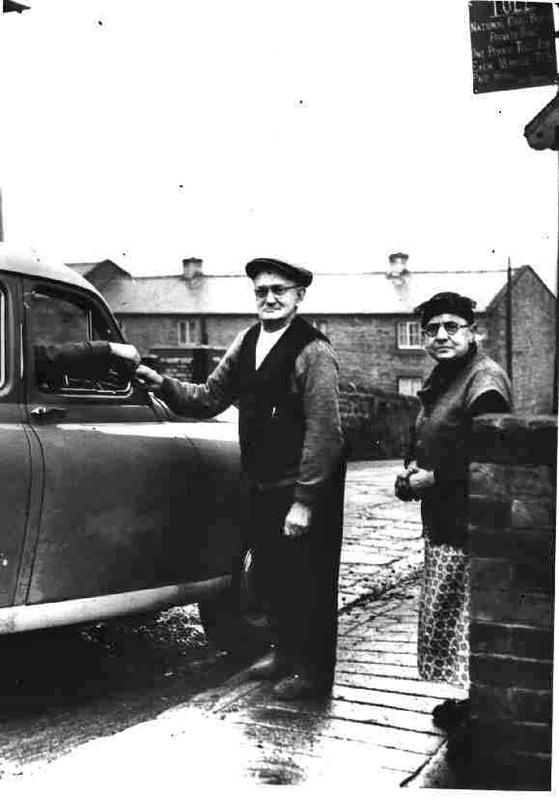 Mr & Mrs Tom Wandless - Toll House Keepers at West Wylam collecting the toll from a motorist c. 1955
“This is bad luck for a man who takes his job as seriously as Mr Wandless. He has been known (and he is 79 and in no better health than an injured ex-miner can be) to stand resolutely in the path of an oncoming car to stop a motorist from getting away without paying his penny. He has been the toll collector since he retired from the nearby colliery 27 years ago, and he will shortly retire from the toll house only because, as he puts it, he has ‘no option’.”

“Almost the whole of West Wylam has ‘no option’ about being transplanted to a new housing estate which is being built on the outskirts. Only a few of the buildings which are in comparatively good condition, such as the village’s two chapels and a general store, are to remain. The rest are being demolished as quickly as possible. West Wylam and part of Mickley are at the centre of what is, by local standards, a massive scheme of slum clearance, which the local urban district council at Prudhoe has begun and which will cost well over £1 million.”

“It is easy for one of the few penny-paying strangers nowadays to see a doomed air about the remains of the village here. It is almost dwarfed already by the new estate where the bright looking houses and bungalows, completed or partly built, seem to emphasise the seediness of the cramped back-to-back houses, about a hundred years old, gradually disappearing in the foreground.”

“But the sense of doom goes only with the buildings. The residents, on the whole, seem to be taking the destruction of their village in rather better spirits than their toll collector, and are looking forward to moving as soon as possible. . . . The people of West Wylam have been used to having a bath in front of the kitchen fire and consider the indoor bathrooms they are now promised a luxury worth a few sacrifices.”

“What makes the move easy, here, is that the people have not far to go. They can carry their furniture from their old houses to their new ones if they wish. . . .In West Wylam about 250 houses will be demolished and about 600 people moved. In Mickley about 180 houses and 500 people will be affected. Both villages will have to exchange a closely knit community — symbolised by Mr Wandless’ toll house – for wider, more sophisticated boundaries of a large modem housing estate.”

“. . . .But although the housewives are living in a rosy dream of having their own bathrooms and what one of them called ‘proper built-in cupboards in every room’, they will have to pay for it. Many of the people have lived free of charge in the Coal Board’s houses in the villages. They will now have to pay rent of well over £1, even allowing for a contribution by the Coal Board. The younger couples did not seem too concerned about this, but it is obviously worrying the older people. They will get concessions from the council and other help, but it is a blow to their dignity. There’s a good deal of feeling behind the toll collector’s words when he said of himself and his wife: ‘I suppose it’s either a new house or the grass for us”.