Photographs relating to this article, including those in this extract, may be found in Galleries 1.2.2, 2.1, 2.5 and 5.5
Prudhoe’s Working Men’s Club had its first premises in a small corrugated iron hut overlooking South Road. It was set up in 1903 and one of its “founding fathers” and first president was Father A H Simmons, the local Roman Catholic priest and author of ‘The History of Prudhoe’ which was published in 1903.

To set up the Club, 794 men put up one pound each: a considerable sacrifice in those days when one considers that the high status of a local council surveyor would command an annual salary of £140 and the average wage for a screenman or labourer would be in the region of 3s 3d for a ten and a half hour day! So the amount put up must have represented more than a week’s wages for an average working man.

The topic of conversation in these days of long hours and small wages would often turn to the question of what was a living wage? One miner’s definition during such a discussion was reported to be - “A living wage? Why enough ter keep the dog, mesel, forbye the wife and bairns!”

The first Club Committee, or directors as they were then known, were Robert Adams, William Brown, William Lawson, John Leathard, Robert Lowdon, John Phillips, Mr Reed and William Robinson, together with John Douthwaite, the local chemist, as treasurer, Richard Geraghty as secretary and Father Simmons. Within three years the Club’s takings were £50 a week, but a bank overdraft of125 had still to be paid off.

Those men who were fortunate to return from the horrors of the First World War’s trenches brought back with them a close sense of comradeship which had been fashioned on the battlefields of France and from their conversations was born the idea of setting up a brewery to serve the local Clubs. The leading light in this initiative was George Middleton, a face worker at Mickley Colliery and a stalwart of the Working Men’s Club movement. George had been a pupil at Mickley School where his appetite for learning was whetted, but his further education was largely self-taught and he was well-versed in religion and French. George was one of the original players of Mickley Football Club, playing for them for about fifteen seasons, during which time Mickley was one of the leading teams in Northumberland. George went on to be president of the Northumberland Football Association. He was also an outstanding politician and it was largely due to his initiative that Prudhoe Urban District Council came into being. His obituary in the ‘Hexham Courant’ of 7th November 1931 states that “he was the Council’s earliest and without doubt one of its ablest chairmen”.

George Middleton became interested in the idea of getting the local Clubs together to form their own brewery since the Mickley, Prudhoe, Crawcrook and Ryton areas in particular had suffered beer shortages due to the fact that the breweries occasionally withheld supplies from the Clubs. So he went so far as to visit Leeds to see how a Club Co-operative worked there. Then on 24th May 1919 a meeting was held with local Clubs in Prudhoe’s Social Club with George Middleton appointed as secretary. From this small beginning the Northern Clubs’ Federation (“The Fed”) grew. The minutes of this meeting are on display in The Big Club.

The Prudhoe Club was, by this time, outgrowing the accommodation afforded by the tin hut and the Palace Theatre at the bottom of South Road was bought in 1925 for the sum of £3,000. The original corrugated iron hut used by the Club later became a laundry.

The theatre which had been able to seat 1,600 was refurbished but, unfortunately, the membership, which had been nearly a thousand at the time of the purchase, fell to a quarter of that number when a subscription of two shillings was introduced to help to finance the new premises. Gradually bankruptcy was averted and ‘The Big Club’ as it became known, began to go from strength to strength. 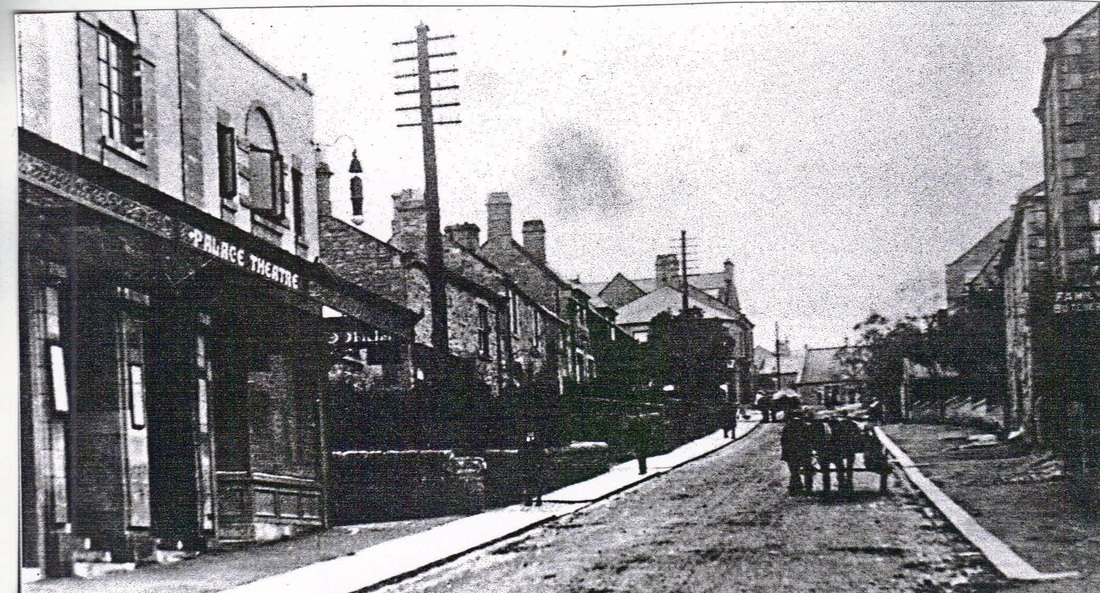 The Palace Theatre c. 1910
At the beginning of the 1970’s the Club decided, at a third attempt, to open its doors to women and it is reported that 130 ladies put their names forward for membership in the first week. The total membership at that time was about 1680 with weekly takings of £1,100.

As stated earlier, it was Father Simmons, the Roman Catholic priest who had helped to found the Club, but it was another clergyman, the late Rev R E Robson, OBE, DCL (Vicar of St Mary Magdalene from 1938 to 1964) who was the only man to be honoured with life membership of the Club without ever being a Club member! Incidentally, the Reverend Robson, who was a leading member of both Prudhoe Council and Northumberland County Council (of which he was Education Committee chairman) gave his name to the prefabricated houses which were erected after the Second World War beside Prudhoe West School and are now demolished. These were named “Errington Place” - Errington being the Rev R E Robson’s middle name.

Over the years the Big Club has provided a great variety of entertainment and activities. For many the biggest day of the year was the Big Club’s outing. A special train would leave Prudhoe Station for an exciting day at the Coast which was enjoyed by adults and children alike. Ted Elkins’ book “So they brewed their own Beer” tells us that “in 1970 the Club spent nearly £2,000 in a half year on entertainment as Prudhoe has always appreciated good singing and a good comedian”. He also reports that “Bingo is played on three nights a week and, apart from the Sunday night concert, there is also a very popular Saturday night dance with music from a six-piece band. For gardeners there’s the annual £700 leek show and a thriving pigeon club is also under the wing of the Club. The Club spends £400 on a summer outing for the old members and a further £380 on a Christmas treat for them and their wives”. 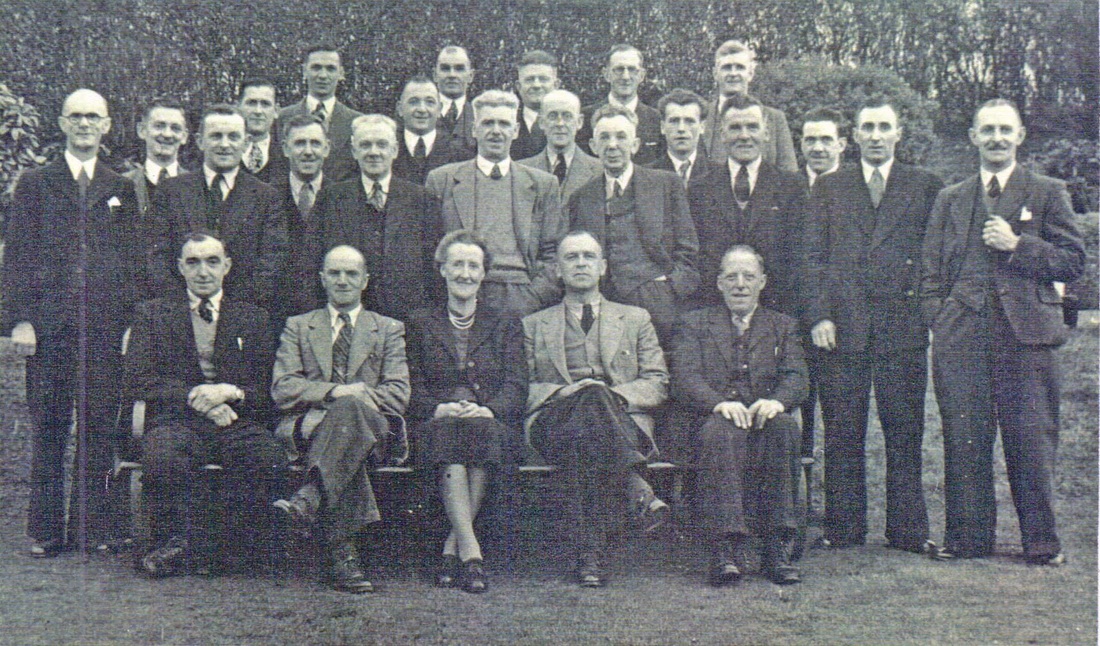 The 'Big Club' Choir c. 1950
Back Row L to R: A Ward, D Kelly, D Jackson, D Jackson, B Crozier, N Parker
Third Row: M Barrat, R Robson, G Moore
Second Row: G Bell, R Lambie, P Makepeace, C Henderson, F Kelly, N Bell, G Coulson, J Willis, G Thompson, J Weston
Front Row: H Robinson, B McVeigh, L Brownbridge (accompanist), B Robson, G Bright
Leek shows were, and still are, central to many of the pubs and clubs in the north east. An article from the ‘Hexham Courant’ of 12th October 1935 gives a comprehensive picture of one of Prudhoe’s champion leek growers of that era. The report tells us “there are many leek growers in the Prudhoe district, and among the most consistently successful is Mr Harry Suddes of Neale Street, Prudhoe.

Although only thirty years of age, he has gained many prizes and his sideboard is adorned with four cups which he has won outright - two for vegetables and two for leeks. He has also won five gold medals for leeks and two for vegetable collections. He won the Prudhoe Conservative Club’s leek trophy, presented by Col D Clifton Brown MP on September 21st last year (i.e. 1934), and has been holder of the trophy four times. His father, Mr James Suddes, was also a prominent exhibitor, and Mr Suddes owes much of his skill to his father. His brother, James, is also an expert leek grower and successful exhibitor. Mr Harry Suddes is in demand as a judge and has officiated in this capacity for five or six years the old Newcastle Leek show at Bull Park, and the Corn Exchange were happy hunting grounds for Mr Suddes and his father, both for leeks and collections, and they won the “Armstrong Cup” at the former (venue) every time it was competed for. Mr Suddes has exhibited a stand of three pot leeks (tight button, 5½ inch) at 145 cubic inches and has had a trench leek stand of 175 cubic inches”. 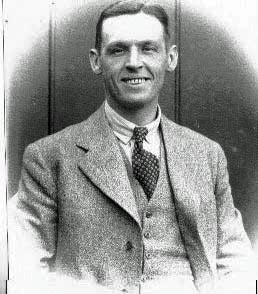 Harry Suddes - Leek grower 1935
The local Clubs were instrumental in organising long distance running events with inter-club “marathons” being particularly popular in the 1920’s. During the 1926 strike, food parcels were awarded as prizes. Jimpson Harle and Dickie Moore were the most successful runners at this time. They were trained by William Grigg and ran for the ‘Big Club’. Jimpson was only five feet tall and was not quite six stones in weight. The route of the “marathon” which attracted numerous spectators, was from West Wylam Inn (“The Jerry”), via Prudhoe Hall Drive and Moor Road, from thence
Mickley and Mickley Square, then back along the West Road to the starting point. 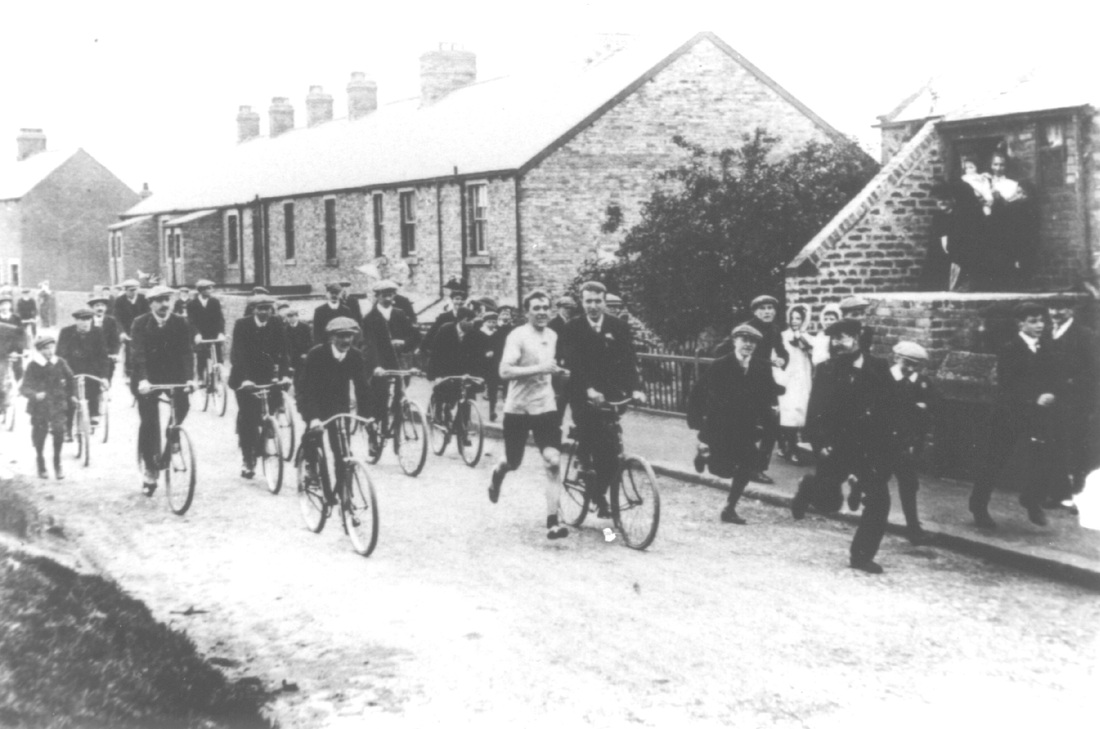 The Prudhoe 'Marathon' during the 1926 Strike
The runner is approaching Prudhoe West School from Halfway
In the early years of World War II an “old vets’ race” was introduced. The course was five miles in length. A winner was “Iron Jaws” Watson. He was so-called  because it was claimed that he could lift a sixteen stone weight in his teeth!

Other accomplished local runners were Jack Appleby and Archer ‘Archie’ Pattison. Archie ran for Blaydon Harriers but, even though he was teetotal, he joined the ‘Tory Club' i.e. Prudhoe Conservative Club on West Road) so that he could also compete for them. 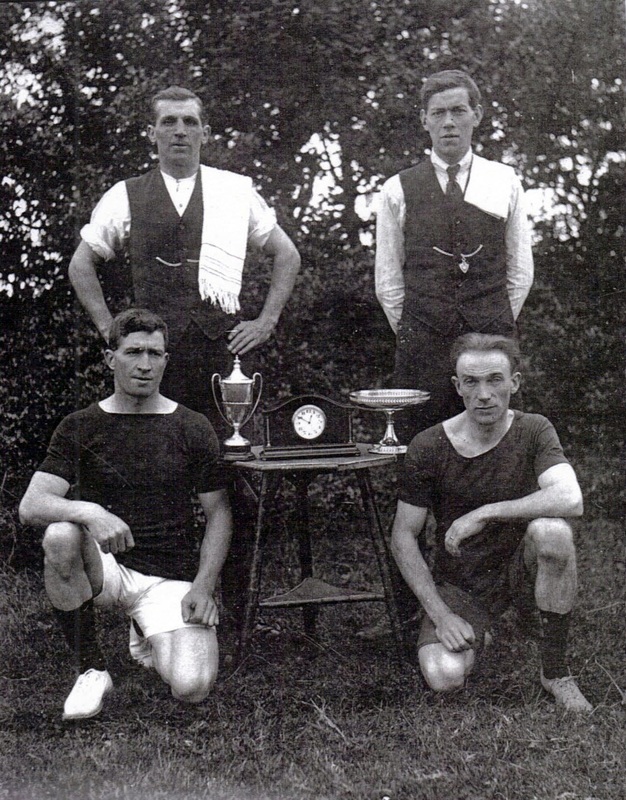 Prudhoe Runners with trophies donated by the Duke of Northumberland c. 1920
Kneeling down in front of their trainers are Jack Appleby and Archer (Archie) Pattison
The photograph shows Jack Appleby and Archie Pattison with the cup presented by the Duke of Northumberland. Jack was the first to win the cup in 1920, but Archie won in the following three years and, having deemed to have won it outright, he was able to keep the trophy for himself. Inter-Club rivalry and strong political feelings were very much in evidence at this period. Most Prudhoe folk were staunch Labour Party supporters and, while Archie was running in one race for the Tory Club, one spectator at the ‘marathon’ was heard to shout out as Archie led the field, “I hope he falls down and breaks his b....... leg!”

The present ‘Tory Club’ is the second to be built on the site, the first having been demolished by fire. In the days when members’ houses didn’t have a bathroom they were able to avail themselves of a bath in the Tory Club.